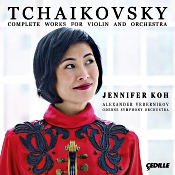 To begin, there's the matter of this Tchaikovsky album's title, "Complete Works for Violin and Orchestra." It sounds pretty impressive and should cover a wide range of pieces, possibly a box set. The fact is, though, Tchaikovsky wrote only three works for violin and orchestra and a fourth orchestrated by Alexander Glazunov. So a single disc contains seventy-four minutes of music. Fortunately, my second point more than makes up for any possible overstatement in the title: American violinist Jennifer Koh, Alexander Vedernikov, and the Odense Symphony do a fine job executing these works, and the Cedille engineers do their usual splendid job recording them. While it may not be an earthshaking release, the album makes for a rewarding listening experience.

The Cedille team have arranged the pieces in chronological order on the disc, but I'll start with the most-popular among them first, the Violin Concerto in D major, Op. 35, written by Peter Tchaikovsky (1840-1893) in 1878. He wrote it just after the dissolution of a calamitous marriage and while carrying on a relationship with his pupil, violinist Iosif Kotek. The composer even wanted to dedicate the piece to Kotek but felt such a measure would put an undue strain on public gossip. In any case, the premiere took place in 1881, and what we consider one of the mainstays of the classical repertoire these days met with a mixed reaction at the time.

Whatever, as good as she is, Ms. Koh never quite answers the question of whether we needed yet another recording of it. Koh displays her technical prowess throughout, while maintaining a sensitive atmosphere. It's a good juggling act, providing all the pyrotechnics needed and at the same time conveying the work's slightly melancholy mood. Of course, there are times when you may want her to just get on with it, as she does tend to linger over details quite a bit. So, for example, the first movement doesn't have quite the forward momentum or sense of sentimental urgency voiced by, say, Jascha Heifetz (RCA or JVC) or the young Itzhak Perlman (Chesky). Still, Ms. Koh plays the second-movement Canzonetta: Andante movingly (if, again, rather slowly), and she adds a note of rollicking boisterousness to the finale that helps toward relieving some of the mournfulness of the preceding movement. And, perhaps most important, Ms. Koh always sustains a graceful, elegant air. Under Ms. Koh and Maestro Vedernikov, the music conveys a healthy dose of Romanticism, combining polish, athleticism, and passion in equal measure. The fact that it also contains perhaps more stops and starts, more changes of direction, than probably any other interpretation is something the listener lives with. You get used to it.

The other works on the disc appeared to me more immediately pleasing: the little Serenade melancolique, Op. 26, and Valse-Scherzo, Op. 34; and the longer, three-movement Souvenir d'un lieu cher, Op. 42, the one orchestrated by Glazunov. Here, Ms. Koh's melding of overt Romanticism with effortless efficiency seemed well and appropriately executed. The Serenade is tender and affectionate without being too weepy; the Valse-Scherzo is ideal for showing off Ms. Koh's virtuosic brilliance; and the Souvenir is poignant, rhapsodic, wistful, and pointed by turns, with an especially frolicsome central scherzo.

The sound is about as near perfect as it can be in these works, with excellent tonal balance, instrumental balance, orchestral depth, clarity, and definition. What's more, the engineers have positioned the violin ideally in relation to the other instruments and captured it in a most-natural manner, never bright, forward, or steely. With good dynamics and frequency range, the recording is probably the best we currently have for this music, so if you're just looking for sound, this might be a good choice.