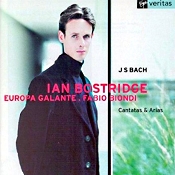 In the booklet insert Michel Roubinet emphasizes Bach's theme of death in the cantatas, which is a natural subject for religious and liturgical works, stressing as they do Man's continual struggle with mortal existence and his possible ultimate salvation in the afterlife. But Bach's music is anything but morbid or depressing.

The ten cantatas, excerpts, and arias sung on this disc by tenor Ian Bostridge are filled with hope and reassurance, and Ian Bostridge communicates them to us with a special joy. He is ably accompanied by the Italian group Europa Galante, led by Fabio Biondi. Although some people have criticized Biondi for his occasionally excessive zeal and breakneck tempos, here he provides the kind of Bach we're all familiar with, set to a mostly relaxed pace yet still done with much enthusiasm. Mainly, Biondi keeps his instrumental forces well out of the way of the solo singer, and Mr. Bostridge carries on admirably, with a firm, steady tenor voice of unflagging character and charm.

Virgin Classics recorded the disc in a chapel in Parma, Italy in March of 2000. The audio has the distinction of sounding big, open, and reverberant in a wholly natural way, with no swamping of the voice or coloration of the instrumental textures in any way. One cannot say much of the front-to-back imaging, but there is a nice sense of surround ambiance in it, even without back speakers. The vocal parts are prominently forward of the orchestra yet not at the expense of losing the orchestral input altogether.

Drawbacks? Hardly. While I sensed a growing sameness about the music as the album wore on, that was no doubt just me, as I am not big on vocal music of any kind. Certainly, there was nothing routine about the performances, which are ideal in practically every way, or the sonics, which kept me attentive and entertained throughout. It's a fine album, all the way around.