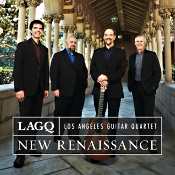 The Los Angeles Guitar Quartet explain the album's concept thusly: "When LAGQ first was formed back in 1980, one of the first pieces we played was a suite of Renaissance dances by Praetorius. We were immediately attracted to this music; its emotions ranging from pure joy to deep melancholy, its potential for color and percussion effects, and its equal-voiced polyphonic texture all made it a natural fit for our four guitars. Since then, we've played styles all over the musical map: Classical to Romantic to Contemporary, in addition to jazz, rock and world-music inspired works. But our love for Renaissance music never went away. In this recording, we revisit our enthusiasm for 16th and 17th century music, but inform it with modern sensibilities we've picked up along the way."

First up on the program is "Music from the time of Cervantes," arranged by William Kanengiser. This is a suite of sixteenth-century tunes that the author of Don Quixote might have heard in his lifetime. LAGQ chose the selections from a production ("The Ingenious Gentleman Don Quixote") they did in collaboration with Monty Python's John Cleese in 2009. This opening suite is among the most entertaining on the program, the sixteen selections lasting from a little over a minute to a little over three minutes each. Most of it is calming, tranquil, relaxing: dances, madrigals, and such, the kind of things that one might have heard in the background at Renaissance banquets or court gatherings. The melodies seem endless, romantic, dark, dramatic, evocative, and the LAGQ play them with their usual finesse.

Next, we have Six Ricercars by Dusan Bogdanovic. Bogdanovic is a modern composer who wrote these pieces in a Renaissance style, which LAGQ found made a perfect blend of old and new for the album. After that is Mon Pere si ma Marie by Francisco Da Milano (1497-1543), arranged by Richard Savino. Then, there's Music in Four Sharps (on Dowland's "Frog Galliard") by the modern composer Ian Krouse. Again, LAGQ mix new with old, while maintaining the Renaissance style. Finally, we get Three French Chansons by Pierre Certon (1510-1572), Pierre Passereau (1509-1547), and Josquin Des Prez (c.1450-1521), arranged by Scott Tennant.

I appreciated the entire program, although I admit I had a slight preference for the actual Renaissance tunes over the newer material. Perhaps this was due to my own romanticized notions of the music, the older tunes conjuring up images of ancient firelit rooms, dancing shadows, and people in colorful attire enjoying a night's revels. However, I also enjoyed the Bogdanovic and Krouse pieces, especially the latter with its enchanting, almost mystical variations.

As for the playing of the LAGQ, I can hardly add to what other listeners have been saying for decades. They play with a precise execution while maintaining a spirited, expressive interplay amongst the guitars. They continue to be a joy.

Rich Breen recorded, edited, mixed, and mastered the album at The Bridge Recording, Glendale, California in July 2014. The sound is a little close, with the four musicians spaced modestly apart across the sound stage. There is a pleasant sense of room ambience, a soft resonance setting off the instruments in a most-natural manner, and a clear-cut separation of the guitars. Although the guitars themselves come across a tad soft, especially for the distance involved, they produce a warm, sweet sound that captures the tenor of the music well, and certainly the strong dynamic impact and quick transient response go a long way toward making the sonic reproduction believable. This is a highly listenable album all the way around.

Email ThisBlogThis!Share to TwitterShare to FacebookShare to Pinterest
Labels: LAGQ