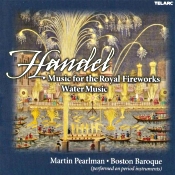 There was a time you couldn't get both Handel's Fireworks Music and Water Music on a single album. In the old days of vinyl records, they simply wouldn't fit. Then in the early days of CD, record companies apparently thought the two works were too important to couple together, charging buyers double for separate discs.

Today, there are any number of recordings of the two pieces paired together, but there is still a good deal of variety on separate discs as well. For instance, do you want your Handel on period or modern instruments? Do you want the Fireworks Music with or without strings? (The King who commissioned the work, George II of Great Britain, specified "no fiddles.") Do you want a chamber-sized ensemble or something approaching the one hundred players that at least one listener at the time said first performed the piece? Decisions, decisions. McGegan, Pinnock, Savall, Leppard, Orpheus, Lamon, Mackerras? They're all among my favorites, but this 2003 entry from Martin Pearlman and his original-instrument group, Boston Baroque, is as good a choice as  any for the beginning collector or the Handel fan who has everything.

I wasn't too sure about Pearlman's interpretation when he began the Fireworks Overture at almost a funereal pace and then launched headlong into a tempo so quick it might have taxed the abilities of all but the most talented musicians of Handel's day. But things settle down quickly enough, and one gets used to Pearlman's often brisk pace. The Fireworks Music is certainly invigorating as are the opening and closing Water Music Suites, with the Suite in G major appropriately more relaxed (supposedly for the actual dinner accompaniment aboard the royal barge).

In short, Pearlman's approach to the music is both scholarly and vivid, done up in a manner that modern research says at least approximates that which Handel might have heard. The performances are poised yet enthusiastic, attentive yet stimulating, polished yet vigorous.

The sound Telarc affords the music, recorded in January 2002 by longtime Telarc engineer Jack Renner, is pleasantly free of undue brightness, harshness, tubbiness, or reverberation. It's really quite well balanced, although I thought it missed the last degree of weight in the bass, giving the sonics some clear textures but not always the warmth I like. Well, in the last analysis Handel presented both of these works outdoors (in a park concert and on a barge), so maybe bass resonance wouldn't have been a factor, anyway. As always with Telarc, the percussion sounds impressive.