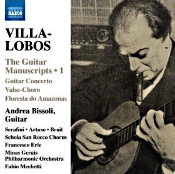 Heitor Villa-Lobos (1887-1959) was probably the most important and influential Brazilian composer of the twentieth century. Accordingly, over the years musicians have recorded most, if not all, of his published material. Nevertheless, this first of three volumes brings together not only some of his more-familiar pieces but thanks to the research of Italian guitarist Andrea Bissoli includes several of the composer's rare and newly discovered works. The album is mostly a treat.

Taking no chances, Bissoli begins the program with a fairly well-known piece, Villa-Lobos's Guitar Concerto, which the composer wrote for guitar great Andres Segovia in 1951. Just don't expect it to sound too much like Joaquín Rodrigo's concerto for guitar, the Concierto de Aranjuez, written more than a decade earlier. Villa-Lobos's composition is a touch edgier, more angular, more modern than Rodrigo's more melodic, more Romantic work. Still, Villa-Lobos's music is easy on the ear, and Bissoli handles it with care. His guitar craftsmanship is sweet and flowing, yet virtuosic when necessary. Several passages are quite lovely, especially toward the end of the first movement, and Bissoli seems to cherish them. The final movement, marked Allegro non troppo - Viva, has a nicely paced rhythm to it, finishing up in lively style without sounding rushed or frenzied, just as the tempo marking indicates. It's a good way, as I said, to start the album.

After that we find a whole series of short pieces, some of them with vocal accompaniment, some of them transcriptions of piano music for guitar, and yet others more recently unearthed in world-premiere recordings. One of the more interesting items to me was Valse-Choro, a gentle waltz that lay undiscovered for eighty years. It contains some wonderfully imaginative sections for the guitar, which Bissoli handles with much charm. Then there are the Cirandas Nos. 1 and 14, arrangements of piano pieces for two guitars. Here, guitarist Federica Artuso joins Bissoli for a pair of French folk-inspired tunes of creative verve.

The few selections I didn't care as much for were those with soprano Lia Serafini. Whether by chance or design, the vocals sounded rather too forward for my taste. I'm not sure if it was entirely a matter of the venue, the singer's voice not complementing the music, or the engineer's miking of the voice; but the singing appeared a bit too bright and edgy to me in the highest, loudest passages. Be that as it may, Ms. Serafini's voice is otherwise expressive and beauteous, negotiating Villa-Lobos's music with an affectionate tone in five voice-and-piano works transcribed for voice and guitar.

Producer Alessandro Panetto and engineers Uli Schneider, Federico Pelle, Andrea Dandolo, and Matteo Costa recorded the music at Teatro do Centro Educacional, Ibirite, Minas Gerais, Brazil, and Chiesa di Santa Maria dei Carmini, Vicenza, Italy, between 2009 and 2012. The sound of the guitar and orchestra is quite good, if a tad close. It's very clean, very clear, dynamic, and open. There's a wide stereo spread involved, quick transient response with the guitar, little or no bass overhang, and a pleasantly mild hall bloom enhancing the sound. On the vocals, however, the room resonance (or the miking) seems to work against the high notes, making them appear slightly too aggressive.

Email ThisBlogThis!Share to TwitterShare to FacebookShare to Pinterest
Labels: Villa-Lobos