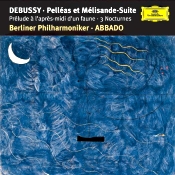 It's always a joy, of course, to listen to the Berlin Philharmonic, but I wonder why the powers that be at DG so often keep these things under wraps for so long? They made this recording in 1998 and didn't release it in America until 2002. Oh, well. It's rapturous music played in rapturous style by the late Claudio Abbado and his distinguished orchestra, and I suppose we should count it a blessing we got it at all.

In fact, the orchestra sounds almost as luxurious as it did under Herbert von Karajan, no small compliment to maestro Abbado. Naturally, the three works included on the disc have something to do with it. They fairly define impressionistic music. The Prelude a l'apres-midi d'un faune with Emmanuel Pahud, flute, is probably the best known of the bunch, and while practically every conductor in the world has made a recording of it over the years, most of which are still available, Abbado's interpretation is among the most seductive, lithe, and sinuous of all. I loved it.

I found the three Nocturnes impressive, too--gentle and graceful--but other conductors have done them up just as well. Nevertheless, Abbado gets excellent support from members of the Berlin Radio Choir in the Sirens segment. 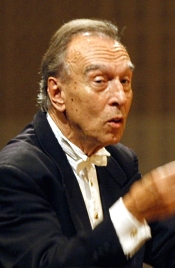 Nevertheless, it's the Pelleas et Melisande suite, arranged years ago by conductor Erich Leinsdorf, that carries the day. It is gorgeous in its Delius-like meandering manner, with waves of sound rolling over the listener in sweet profusion like spring breezes on a warm day. The concert suite leaves out much of the overt action of the complete work, contenting itself mainly with the linking material, which is just fine by me for its relaxed tone and romantic atmosphere, especially as Abbado presents it. And then there's the sheer beauty of the Berlin orchestra; it's hard to resist.

The sound quality varies, though. DG recorded the first two items in Jesus-Christus Kirche without an audience, while they recorded the Pelleas music live and closer up at the Berlin Philharmonie. Now, normally I don't fancy live recordings, but in this case it actually outshines its companions in brilliance, transparency, and dynamics. It simply sounds more alive, although in all fairness the more distanced and veiled sound of the first pieces rather fits their mood. In any case, as I say, it's Abbado's conducting and the magnificence of the Berlin ensemble that are probably most at issue here, and they're so good I wouldn't let a little matter like ordinary sonics interfere with a good time.