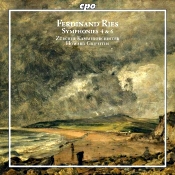 Sometimes a guy can't win for losing. After Beethoven took the musical world by storm in the early Nineteenth century, critics faulted the works of fellow European composers either for copying the great man's style too closely or for not being similar enough to his charms. What are you going to do? Ferdinand Ries (1784-1838), a friend and colleague of Beethoven, found himself exactly in that position.

One can see why. His Fourth and Sixth Symphonies represented on this disc do, in fact, resemble some of Beethoven's technique, yet they are not quite innovative enough to have withstood the test of time. Thus, as happened with other composers of Beethoven's time, people soon forgot all about Ries and his musical output. Yet the oversight of the composer in modern times may not be justified, if one can judge from the two of his eight symphonies represented on this 2003 CPO release. The works actually sound pretty interesting and merit a listen.

The Fourth Symphony (1818) is probably the lesser of the two pieces musically, though it's still impressive. The opening movement is quite ordinary, I must admit, but it goes on to a lovely, modern-sounding melody in the slow movement and some zippy, dance-like business in the Scherzo that will have you thinking of the Beethoven Seventh. Unfortunately, the symphony ends in a finale that while festive in temperament is really of little other note. Still, those two middle movements seem more than worth the trouble, especially in the present recording.

The Sixth Symphony fares even better. It begins with a solemn Larghetto that soon opens up to a vigorous if somewhat repetitious Allegro. This leads into a most original Minuetto that gets more and more pastoral as it goes along, followed by a slow movement that brings with it shades of the same in Beethoven's Sixth (not coincidentally, the "Pastorale"). The Finale bears with it a Turkish influence reminiscent of Haydn's "Military Symphony"--drums, cymbals, and such--that had long gone out of vogue by Ries's time but which he rolls out, anyway, much to our delight.

Conductor Howard Griffiths and the Zurich Chamber Orchestra, about thirty players strong, do probably as much with the music as they possibly can, and CPO engineers present it in sound that is clean and clear. There is perhaps wanting a certain degree of bass warmth, yet there is a realistic sense of orchestral depth present, very little congestion, and strong dynamics. The whole affair, music and sound, is different yet familiar at the same time. It's worth a listen.

Incidentally, although the folks at CPO have discontinued this item as a single disc, you can still find the disc on-line at a very reasonable price. And if you're really interested in Ries, CPO continues to issue Maestro Griffith's recordings of all eight Ries symphonies in a four-disc set.

Email ThisBlogThis!Share to TwitterShare to FacebookShare to Pinterest
Labels: Ries