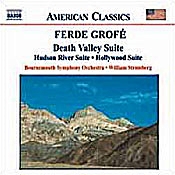 While the reputation of American composer, arranger, and pianist Ferde Grofe (1892-1972) lies squarely with the Grand Canyon Suite from 1931, he composed any number of other such pictorial pieces of music, most of them coming after the success of the Grand Canyon Suite and most of them either less inspired or more imitative. The three works on this disc, the Hollywood Suite, the Death Valley Suite, and the Hudson River Suite, dating from around 1939, 1949, and 1955 respectively, are typical examples.

The Hollywood Suite is, in my opinion, the least winning of the three. Like Hollywood itself, the music is flashy and flamboyant, starting out with a rather silly movement called "On the Set--Sweepers," complete with the sounds of sweeping brooms, and ending with "Director-Star-Ensemble," a big, largely forgettable production number. Nevertheless, Maestro William Stromberg and the Bournemouth Symphony Orchestra give it their all, and while the music may be rather lightweight, it is undeniably fun.

The Death Valley Suite is supposed to be the disc's big attraction, but it, too, is rather overambitious. It attempts to be another Grand Canyon affair, adding local color with the sounds of wagon trains, whinnying horses, dust storms, and the like. Sorry, I wasn't buying it. Again Maestro Stromberg injects as much vigor into the proceedings as one might expect, even if it's all a bit over-the-top. 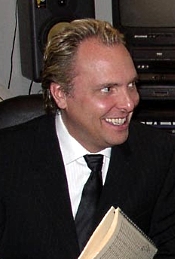 For me, the Hudson River Suite was the prize of the lot, especially the "Rip Van Winkle" movement. In this suite, the composer adds color to support the tone pictures he's drawing and not color for the sake of color alone. The Hudson River music includes a lovely introduction called "The River," swings into "Henry Hudson" and "Rip" (Van Winkle), takes us on an "Albany Night Boat," and ends boisterously in "New York!" The music still may not possess any great substance, but it's probably the closest to Grofe's Grand Canyon work represented on the album, with Stromberg providing all the show, nuance, and imagination it needs.

The music-making under Stromberg's direction is, as I say, excellent as usual, the conductor having done this sort of thing for Naxos for years. Equally impressive, in this 2002 release Naxos provided Stromberg with one of their showcase audio editions, the sound clean and clear, with good detail, impressive percussion, and very wide dynamics. Indeed, the wide dynamic range may annoy some listeners because the difference in softest and loudest passages can make it difficult to find a compromise volume setting that won't blow you out of your seat. Still, the wide dynamics are what every audiophile looks for in a good recording.

Anyway, the Hudson River Suite may last only a little more than eighteen minutes, but with sound as good as this, it makes the disc worth its relatively inexpensive price.

Email ThisBlogThis!Share to TwitterShare to FacebookShare to Pinterest
Labels: Grofe