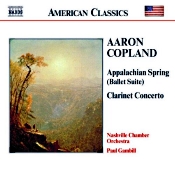 It must be something in the air in Nashville. A month or so before reviewing this disc about a decade ago, I sat down and listened to one of the most lively and sparkling renditions of West Side Story I'd ever heard, done by the Nashville Symphony Orchestra. Then I listened to the present Nashville recording, one of the best compilations of music by Aaron Copland (1900-1990) around, this time done by the Nashville Chamber Orchestra. I don't know what's going on in Nashville, but I hope Naxos continues to record there for a while.

Maestro Paul Gambill's collection of Copland material with the Nashville ensemble focuses on the more contemplative side of the composer, although it opens with three short Latin-American Sketches (1972) that are quite colorful and done up in lively style. The main things, though, start with the Clarinet Concerto (1950), written expressly for Benny Goodman, who subsequently admitted he was afraid to play it, fearing he wasn't up to doing it justice; but he did play and record it, frequently. The piece takes up first in a surprisingly but beautifully melancholy, romantic mood and then lightens up, becomes playful and jazzy, and finally turns slightly Latin in mood. Gambill has the measure of it, and clarinetist Laura Arden is a charmer.

Copland wrote Quiet City (1940) for a play that never opened, but the composer salvaged a suite from it that in this recording sounds deeply felt, reflective of silent streets and hushed nighttimes in the city, apparently a period of day about which Copland had strong ties. Gambill and his players capture the mood nicely.

Then, the album ends with the composer's suite from the ballet Appalachian Spring (1944), where Copland's own notion of Americana meets the old Quaker tune "Simple Gifts." Interestingly, the booklet note says that it was Appalachian Spring "that made Copland the first American composer to win global recognition and popularity." I guess Gershwin didn't count, or Gottschalk or Joplin or Coleridge-Taylor or Chadwick or Sousa or MacDowell or Beach or Herbert or Ives or.... Whatever, Maestro Gambill handles the piece with an appropriate sweetness and repose.

The Nashville Chamber Orchestra plays all of this with faultless skill, if perhaps not doing it quite as deftly as Copland himself or Bernstein did in their Sony (Columbia) recordings or Tilson Thomas on RCA. Certainly, however, the Nashville ensemble plays with just as much sensitivity and enthusiasm, and that counts for a lot.

The recording, which Naxos released in 2002, sounds superbly balanced, the frequency range understandably not reaching down too far as these are essentially chamber pieces, after all. The clarity, left-to-right imaging, and overall tone of the sound, however, appear on a par with the best recordings the folks at Naxos have ever provided us. With over an hour of genuinely classic and classy music presented by a classy orchestra in classy sonics, the disc seems inspired.