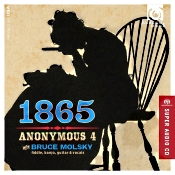 The year 1865 marked the end of the American Civil War. It was also smack dab in the middle of the Romantic period in art, literature, and music. Romanticism flowed through American pop culture as well, so on this disc of Civil War-era songs, expect to hear music infused with highly expressive, sensitive, personal, ofttimes sentimental overtones.

Most of the songs themselves, eighteen of them, appeared during the Civil War, and many of them remained popular for a long while after, a few continuing in familiarity to this day. The group singing them is Anonymous 4, an American female a cappella quartet who often specialize in early music, medieval to Renaissance. This album, like their album of spirituals, is kind of a departure for them, but a wonderfully inspiring one. Joining the quartet (Jacqueline Horner-Kwiatek, Susan Hellauer, Ruth Cunningham, and Marsha Genensky) is two-time Grammy nominee Bruce Molsky on fiddle, banjo, guitar, and vocals. They make an impressive combination.

Now, before I utter another word, I have to issue a warning: Unless you have a heart of stone, you might find yourself shedding a tear or two. Usually, I'm immune to the hyperbole of PR agents to bias my opinion of things; in this case, Harmonia Mundi e-mailed me a sample song from the album, and it was all I needed to request the disc for review. The sample alone had me in tears. As I say, these are strongly moving tunes.

The vocals of Anonymous 4 are precise, articulate, and warmhearted; and the addition of the lower male voice complements their tonal and emotional qualities. They are an outstanding ensemble, gorgeous and heartfelt in their harmonies and presentation.

The opening song is "Weeping, Sad and Lonely," and it sets the mood, an a cappella number framed in five-part harmony. If it doesn't grab you from the outset, you'd have to be a rock.

"Darling Nelly Gray" adds Molsky's banjo to the arrangement, and it's effective in its simplicity. "Sweet Evelina" is, well, sweet, again sung a cappella, which after hearing it is the only way I could imagine anyone singing it. For changes of pace, "Bright Sunny South" and "Brother Green" feature Molsky singing alone, accompanying himself on banjo or fiddle, and "Camp Chase" with Molsky just on fiddle. Frankly, as nice as these are, I missed the ladies' voices.

On a few numbers we find solos, duets, and trios, and they work, too; however, I tended to prefer the quartet together with Molsky for their fuller body and sonority.

Then, there are the tunes we've come to know and love probably all our lives: "Tenting Tonight on the Old Camp Ground," "Aura Lee" (think Elvis), "Listen to the Mockingbird" (think Three Stooges), "Home, Sweet Home," "Abide with Me," "Shall We Gather at the River," and the like. But you may not have heard them done quite like this, in, as the notes say, "something close to their original settings." Beautiful.

Absolute favorites on the program? Well, I suppose so: the aforementioned "Weeping, Sad and Lonely," "Darling Nelly Gray," "Sweet Evelina," "Tenting on the Old Camp Ground," "Abide with Me," and "Shall We Gather at the River," plus "Faded Coat of Blue" and "The Picture on the Wall."

To say these are simply "sad" songs or mournful dirges would be a shame. Yes, you'll find them filled with sentiment and feeling, yet they're so extremely individual and affecting they transcend any facile descriptions. They are wonderful old songs, wonderfully performed.

This is another one that easily takes its place among my favorite albums of the year.

The disc comes fastened to the inside of a sturdy Digipak case, and an eighty-four-page booklet of notes, history, lyrics, and pictures completes the package. Just be careful how you handle the booklet; mine began coming apart at the binding shortly after I opened it.

Producer Robina G. Young and engineer and editor Brad Michel recorded the music in hybrid stereo/multichannel SACD at the Concert Hall, Drew University, Madison, New Jersey in June 2014.  I listened to the two-channel SACD layer. The sound is clear and ultra clean, the voices rich and full, a mild room resonance adding a welcome note of realistic ambience to the affair. The voices appear well grouped, too, with the ladies often slightly to the left and Molsky's vocals slightly to their side. Occasionally, Molsky appears in the middle of the female voices. In any case, it's all quite lifelike.