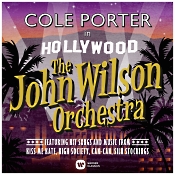 The last time I visited a recording by John Wilson and his orchestra, they were doing the music of Rodgers and Hammerstein, and they were doing a splendid job of it. Apparently, there is still an audience for agreeable, popular old tunes, which The John Wilson Orchestra exploits to good effect.

For those of you who may not be familiar with British orchestral conductor John Wilson and his ensemble, Wilson formed the group in 1994. It is both a symphonic orchestra and a big jazz band, most often performing the original arrangements of older stage and screen music. They have performed annually at the BBC Proms summer festival since 2009 and become quite a success with their albums as well.

On the present disc, Wilson tackles some of Cole Porter's most-famous songs from Hollywood movies. He includes only fifteen numbers on a CD that could have held another half dozen or so, but who's complaining. Wilson's orchestra, comprising nearly seventy members, shares the spotlight with vocalists Anna-Jane Casey, Kim Criswell, Matthew Ford, Sarah Fox, Richard Morrison, and additional support from Maida Vale Singers Katie Birtill, Mary Carewe, Yona Dunsford, Emma Louise Kershaw, and Lance Ellington. This is no small production.

Admittedly, the music of Cole Porter, like that of another songwriter who wrote a ton of great stuff, Irving Berlin, has gone out of style since young people became the primary pop-music audience many years ago. Still, Porter's music shows up in revivals all the time, and in 2011 Woody Allen featured it in his romantic-fantasy Midnight in Paris. And then there are orchestras like John Wilson's that specialize in older material and prove there's still interest in old tunes. After all, good music is good music. Plus, John Wilson tries to get it right: no modernizing, no stylizing, no retrofitting for a young, hip, contemporary audience. He uses as close to the orchestrations the composers intended as possible, and the music sounds all the better for it.

Anyway, things start with a big number called "Stereophonic Sound" from the 1955 stage musical and 1957 movie Silk Stockings, Wilson's version with Matthew Ford and Anna-Jane Casey providing the vocals. Like most Porter songs, it's clever, witty, and catchy, with Wilson and his team ensuring it's as zippy as ever. It was good to hear Wilson start off the program with something a little out of the ordinary instead of just picking all-time favorite Porter songs. Both the orchestra and soloists do their most to keep everything at a highly energetic level. What's more, it helps that everyone involved is so talented. They're all a delight to hear.

Then we get an even more-famous selection, "Begin the Beguine," a tune that started life rather inauspiciously on stage in 1935, got a jazzy kick from Artie Shaw shortly afterwards, and really took off a few years later in the film Broadway Melody of 1940. Neither of the first two items on the program make us forget Fred Astaire, who starred in both films, but they do remind us what good songs they are. Katie Birtell, Mary Carewe, Yona Dunsford, and Emma Louise Kershaw capably handle the vocals. Wilson's version is quite up-tempo and delightful; you hear none of the syrupy, romantic overtones the tune took on with age.

And so it goes, every song attractive and engaging. Favorites? Sure. I enjoyed "Love of My Life," the Judy Garland number from The Pirate, here sung beautifully by Kim Criswell. Other favorites include the lovely "From This Moment On"; the splendidly tongue-in-cheek "Wunderbar"; the high-spirited Overture to High Society; the amusingly sultry "My Heart Belongs to Daddy"; the touchingly melancholy "It's All Right with Me"; the inventively funny "Let's Do It"; and then "Les Girls," with Matthew Ford sounding remarkably like Gene Kelly.

Producer Tom Croxon and engineer Jonathan Allen recorded the music at No. 2 Studio, Abbey Road, and Angel Studios, London in May 2014. The sound is more typical of a pop album than a classical one, which is appropriate since this is a pop album, after all; however, it doesn't make me particularly happy because I'd rather have heard something a little more natural. Instead, the album pretty much hits you in the face with its sonics, the vocalists miked very close, the orchestra appearing flat and hard, the overall sound slightly forward and bright. Yes, it sounds detailed and revealing; no, it is not very realistic in terms of making the listener believe he or she is in front of a live orchestra. It's all studio multi-miking, with highlighting and spotlighting the order of the day. Still, its clarity and impact should please most listeners of this type of music, and I suppose that's the main thing.

Email ThisBlogThis!Share to TwitterShare to FacebookShare to Pinterest
Labels: Porter