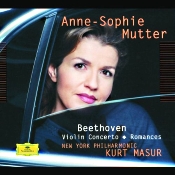 Even a decade or more ago when this disc first appeared, most listeners recognized that Anne-Sophie Mutter was among the world's most-accomplished violinists, a virtuoso of the highest order. But as much as I respect her talent, did DG really have to emphasize her physical attractiveness to such a degree as on this album just to sell her discs? Ms. Mutter's photograph appears no less than nineteen times on the cover jacket, booklet insert, and CD itself. Perhaps it's all part of our cult of star worship. Her name looms in print twice the size of Beethoven's on the front of the album. But I suppose the point is to get as many people involved with classical music as possible, and if the folks at DG want to flaunt Ms. Mutter's natural beauty in addition to her musical talents, more power to them.

In any case, the performance is not all that much better than any of 800 other recordings available of Beethoven's Violin Concerto in D major, Op. 61, and for me it's certainly not as good as the performance she recorded with Herbert von Karajan years earlier. Now, you would expect Ms. Mutter to be strong on lyricism and grace, which she is, and she conveys a requisite power as well. What I didn't expect was her rather lax rendering of the outer movements, particularly the opening section, and an equally indulgent accompaniment from Kurt Masur and his New York players in an interpretation that seems to these ears slow to a fault. Never did I find in this rendering of the piece the soaring grandeur conveyed by artists like Henryk Szeryng (Philips), Jasha Heifetz (RCA), Itzhak Perlman (EMI), Gidon Kremer (Teldec), Vadim Repin (DG), Arthur Grumiaux (PentaTone), and others.

It seems almost as though Ms. Mutter had gotten older and more set in her ways. The newer recording is not as Romantic as the one with Karajan, and the soloist now seems more serious. Perhaps she was trying to appear more mature? I don't know. Or maybe it was the influence of Karajan on the younger Mutter that made all the difference. Karajan was a pretty dominate character and had a glamorous style of his own, which had to have rubbed off on Ms. Mutter. Masur, on the other hand, always seemed to me rather more prosaic, and it could have been showing in this later DG recording.

Oddly, perhaps, I thought the two Romances for Violin and Orchestra that DG coupled with the Concerto sounded somewhat quicker paced than most I've heard and lost some of their poetry in the process. Too slow, too fast? Go figure.

DG's sound is the high point of the recording. It is clean and clear and very dynamic, perhaps missing a little something in the strongest bass and the most-extended highs but comfortable and realistic, nonetheless. Now, if only the primary performance were more animated I could have gotten behind this release a bit more. However, this is not to say it will disappoint everyone, especially not Ms. Mutter's fans. It's only to suggest that if you already have a favorite recording of the work on your shelf, there is no compelling reason I can suggest for your buying this one, too.