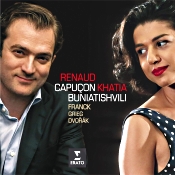 French violinist Renaud Capucon and Georgian pianist Khatia Buniatishvili are two relatively young and enormously talented musicians who make beautiful music together on this disc of violin sonatas from Franck, Grieg, and Dvorak. It's really quite a lovely album, the partnership of the two players producing some delightful results.

Things begin with the Sonata for Violin and Piano in A major by French composer, pianist, and organist Cesar Franck (1822-1890). Franck wrote the Sonata in his later years, 1886, dedicating it to his friend, violinist Eugene Ysaye, as a wedding gift. The four movements of the piece follow a slow-fast-slow-fast structure, with the slow sections the most memorable for me. They are sublime, and Capucon's solos are wonderfully lyrical and soaring. Ms. Buniatishvili's accompaniment, especially in the faster segments, is virtuosic, too, and they make the music come alive in contrasting contemplative and vigorous moods. Beautifully done.

Next up is the Sonata for Violin and Piano No. 3 in C minor by Norwegian composer and pianist Edvard Grieg (1843-1907). He wrote it in 1887, some twenty years after writing his first two violin sonatas. It would be his last completed chamber work. Flawless intonation from Capucon and nuanced passage work from Buniatishvili highlight the work. After the peace and serenity of the opening Franck music, the Grieg sounds more dramatic, at least in the beginning. In fact, it's almost startlingly dramatic at this point, with the performers playing up the difference for all it's worth. But then they settle into Grieg's more sensitive and melodic material, and the music takes a daring turn into the rhapsodic. The second of the three movements is most songlike, with the violin singing its part in spirited fashion. The soloists take turns expressing the work's varied passions, the finale sounding as close to a traditional folk melody as Grieg would get.

The final item on the program is the four-movement suite called Romantic Pieces, written in 1887 by Czech composer Antonin Dvorak (1841-1904). Dvorak's four little compositions sound sweetly evocative under the guidance of Capucon and Buniatishvili, who again work wonderfully together, complementing each other's every note. Again I found the slower movements most to my liking, the performers infusing the music with a sublime attractiveness that is downright impossible to resist.

Producer Michael Fine and engineer Jin Choi recorded the album at Auditorium Campra, Conservatoire Darius Milhaud, Aix-en-Provence, France in April 2014. The two performers are playing on a large stage, miked at a moderate distance. The space is just enough to provide a strong presentation with good detail yet admit a pleasant degree of reflective hall ambience as well. The sound is smooth, warm, resonant, and mildly rounded, both artists showing to advantage in a natural-sounding acoustic.