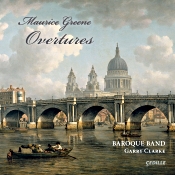 Some of you may recognize the name of the English composer and organist Dr. Maurice Greene (1696-1755). I did not. I had to dig into the disc's booklet notes to find out more about him. Turns out, according to conductor Garry Clarke who wrote the notes, "he was one of the most important figures in English musical history in the 18th century. Yet he is little known today and his instrumental pieces are rarely performed." Indeed, I can attest to that.

Greene became organist at the Chapel Royal in 1727 and Professor of Music at Cambridge University in 1730. Then, in 1735 the Crown appointed him Master of the King's Musick. So, yes, he was an important guy back when.

Mostly, Greene composed choral music, verse anthems, oratorios, operas, and some keyboard music. Here, we get some of instrumental music, his Six Overtures in Seven Parts, written originally in 1745 in an arrangement "for harpsichord or spinet" and first published in 1750. Clarke tells us that they display a quintessential Englishness while recognizing the 'new' Italian style being imported" at the time. He further tells us "the overtures are charming and delightful, with whistleable melodies, easy harmony, and inventive counterpoint. They conjure up the charm of the English countryside and the frivolity of the English 18th century."

Certainly, Maestro Clarke and his ensemble, the Baroque Band, which he founded in 2007, do their best to conjure up delights. And they do so in a most elegant fashion. This is no Raggedy-Annie period orchestra but a rich, polished, finely tuned group of performers. In fact, if anything, they may appear too polished compared to some of the historically informed groups we've gotten used to over the last half century or so. Still, they are a joy to hear, and they do bring the music to life with liveliness and gusto.

The overtures, of course, are not really "overtures" as we think of them today; that is, they are not introductions to something else, as in opera overtures. Instead, these are Baroque overtures: miniature suites alternating fast and slow movements (in this case, three or four movements each). However, one could view the little opening movements as opera overtures in themselves, and they contain a good deal of buoyant charm.

Probably the most important aspect of Clarke's performances with Baroque Band, besides the enthusiastically elegant playing I alluded to earlier, is their ability to keep one listening. OK, much of this latter quality we have to attribute to the composer and his music, but you also know that Baroque music can sometimes become a bit wearying if there's too much of it repeated at the same time. I mean, no one is sure about just how the composer intended people to listen to his overtures: all at once or one or two at a time. I worried that I might find listening to all six at the same time something of a chore, my not being a dedicated Baroque fan. Nevertheless, every overture is significantly different from the others, some sounding like Bach, some like Handel or Vivaldi, but mostly sounding like Greene. So listening to them all at once (with only a brief break toward the middle for a quick snack) proved more fun, at least the way Clarke and company present them, than I anticipated.

In addition to the overtures, there are five more, very brief items: Pieces in C minor, A minor, and G minor from Lessons for the Harpsichord, and overtures to Phoebe and St. Cecilia. They are all lovely in their own way, with my own delight going out for the harpsichord.

Producer Jim Ginsburg and ace engineer Bill Maylone recorded the overtures in 2010-2014 at Nichols Hall at the Music Institute of Chicago, Evanston, Illinois; at College Church, Wheaton, Illinois; and at Fay and Daniel Levin Performance Studio at 98.7 WFMT, Chicago, Illinois. To my ears, the sound is a trifle bright in the upper midrange, but it's extremely clear and well detailed. And for all I know, this slight forwardness may be exactly what the ensemble sounded like in the particular recording venues represented. In any case, played back at a realistic level, there is a wide stereo spread to the sound, good depth and dimensionality, a quick transient response, and pretty good frequency extension. A modest hall resonance adds a further degree of realism to the presentation.

Email ThisBlogThis!Share to TwitterShare to FacebookShare to Pinterest
Labels: Greene