Copland: In the Beginning (CD review) 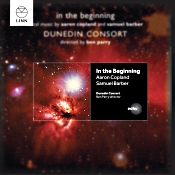 You're probably wondering what the Dunedin Consort, a Baroque choral and instrumental ensemble based in Edinburgh, Scotland, is doing singing the music of two twentieth-century American composers, Copland and Barber. Good question. The way the program notes describe the situation: "Both Copland and Barber, in their settings for unaccompanied chorus, had an instinctive feel for the human voice, a natural gift for word setting, and a pure style of writing that rarely, if ever, obscured its literary dimension." So, for a musically dedicated choral group like the Dunedin Consort, the real question is, Why not do Copland and Barber?

Anyway, we get several works on the album for unaccompanied chorus, two from Copland and a few more from Barber, things getting under way with the appropriately named In the Beginning by Aaron Copland (1900-1990). Written in 1947, it's a choral motet with soprano soloist, inspired by the first chapter of Genesis from the King James Version of the Bible. Although it is probably not among Copland's most well-known works, many critics consider it among his best. Copland wanted the piece sung in a "gentle manner," which is exactly what director Ben Parry and his Consort do. Still, it's not so gentle that it excludes any life or liveliness. This is a vibrant, rhythmic, uplifting performance that commands respect and admiration from start to finish. The Dunedin singers sound crisply articulate yet convey much feeling for the music. The soloist, Sally Bruce-Payne, sounds fresh and alert, with a beautiful vocal tone. In fact, everyone involved with this sixteen-minute production does an outstanding job, including Parry, who never rushes the music but lets it unfold naturally and comfortably.

Next, we get Reincarnations, choral compositions for mixed chorus by Samuel Barber (1910-1981), a work he completed in 1940, followed by several other Barber songs. Reincarnations comprise three "contemporary madrigals," in this case English adaptations of early Irish poetry. Then, there are musical selections adapted from the writing of other British poets, including Gerard Manley Hopkins, concluding with Barber's 1967 choral arrangement of his own very popular Adagio for Strings, set to the words of the "Agnus Dei." Under Parry and his Consort, they sound expressive and Romantic, qualities Barber would exhibit throughout his musical life.

Lastly, we find more of Copland's compositions, Four Motets, written early in the composer's career, 1921, during his student days. Copland wouldn't allow their publication until fifty years after he wrote them, saying, "Perhaps people want to know what I was doing as a student. The style is not really yet mine." Nevertheless, they are quite lovely, joyful and pleasing, and the Dunedin Consort performs them lovingly.

Producer Ben Turner and producer-engineer Philip Hobbs recorded the music at Greyfriars Kirk, Edinburgh, UK in October 1999. Linn Records originally released the album in 2000 and rereleased it in 2014. Capturing the natural sound of the human voice, especially in chorus, is among the hardest things for a recording engineer to do. Often, vocals come off too bright, forward, hard, or edgy. Maybe that's OK for a pop album, where you simply want the soloist or backup singers to come across as clearly as possible, but it doesn't work as well for a classical album where listeners expect the sound to remind them of actual concert-hall experiences. Moreover, listeners are probably more aware of what human voices sound like in reality than they are of musical instruments. So if the vocal tones aren't quite right, they become glaring inconsistencies in a recording.

Happily, the folks at Linn get it mostly right. The voices, singly or in chorus, sound lifelike, smooth, rounded, yet detailed. There is not much brightness or edginess here except in a few of the loudest passages. A mild hall resonance adds to the accuracy of the presentation.