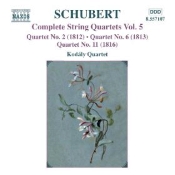 Naxos has produced some absolutely top-drawer products over the years as well as some pretty mediocre ones. I'm happy to say these Schubert string quartets from the Kodaly Quartet are among the top-drawer issues. The three quartets on the disc vary somewhat in musical quality, of course, but the performances and sound are superb.

Austrian composer Franz Schubert (1797-1828) wrote fifteen consecutively numbered quartets, most of them while he was in his teens, and every few years we get a complete set of them, each set seemingly as good or better than the last. This is among the least-expensive sets I've found, and it's among the best. Each disc in the seven Naxos volumes contains two or three works, this one three: the String Quartet No. 2 in C major, D. 32; the String Quartet No 6 in D major, D. 74; and the String Quartet No. 11 in E major, D. 353. They are early works, as I say, and not among Schubert's finest, yet they are engaging and full of the promise of better things to come.

Of the three pieces represented here, it is the first on the agenda, No. 6, that wins my vote. It is by far the lightest, most cheerful, most lyrical of the group, and it serves to remind us why Schubert was so proficient at producing hundreds of songs in his short thirty-one year lifetime. The playing of the Kodaly Quartet is confident, lively, lilting, and thoroughly delightful. Moreover, they are sensitive and lyrical when the occasion demands, giving us the best of all possible worlds. 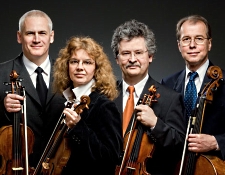 Concerning the other couple of pieces on the disc, No. 2 may be of interest largely because it was only just recently reassembled in modern times, 1954, but it really was not of much interest to me personally, being a bit too bleak in outlook. Schubert wrote it at a time when he was in his mid teens and had just lost his mother, and the effect of the circumstance may have influenced his mood. Not that a melancholy mood is bad, mind you, just not what I was looking for at the time my listening. Of the remaining piece, No. 11, it is the two inner movements, the Andante and Minuetto, that stand out for their felicitous, purely Schubertian charm.

Naxos provide the Kodaly players a most hospital sonic environment in this 2003 recording, spreading the instruments across the sound stage in wide but still fairly natural balance, with clear definition and a sweet but not too prominently reverberant ambience. Anyway, for No 6 alone, the disc is worth its relatively modest asking price.