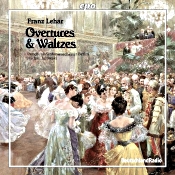 Apart from the operetta The Merry Widow, you don't hear much of the music of Franz Lehar (1870-1948) anymore. I suppose his brand of slightly schmaltzy romanticism has long since become passé. And when an album like this one of the man's orchestral music does come along, some people no doubt compare it to Willi Boskovsky's sprightly, mid-Eighties recording for EMI. Fortunately, most of the material on conductor Michael Jurowski's 2003 release with the Berlin Radio Symphony Orchestra is different from that included on the Boskovsky disc, so Jurowski's program makes an attractive complement to the older recording.

The only partial duplication is the music from The Merry Widow, as we might expect, with Boskovsky giving us a briefer synopsis and Jurowski the longer, more complete overture. While I still prefer Boskovsky's lighter, bouncier way with things, certainly Jurowski provides plenty of energy and enthusiasm. 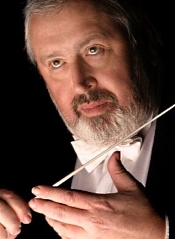 In addition, Jurowski gives us the waltzes Altwiener Liebeswalzer ("Old Viennese Love Waltz"), Wilde Rosen ("Wild Roses Waltz"), Adria Walzer ("Adriatic Waltz"), and the Grutzner Waltz, plus the overtures to Clo-Clo and Der Gottergatte ("Divine Spouses"). The conductor plays each of these pieces with sparkle and wit, with an orchestra that apparently knows the music well and is not ashamed to share it with the world.

CPO's big, lush sound, combined with the relatively large size of Jurowski's orchestra, appeared to me a bit overwhelming in the opening Merry Widow music, especially compared to the slightly smaller ensemble Boskovsky uses. Nevertheless, the ear adjusts. The sonics seem decently spread out across the sound stage, and they project a good deal of warmth and resonance, if rather modest depth of field. The result is reasonably natural and realistic to the concert hall, but it may not win over a lot of audiophile admirers.

Email ThisBlogThis!Share to TwitterShare to FacebookShare to Pinterest
Labels: Lehar