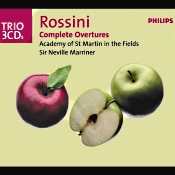 When these twenty-odd overtures appeared on four separate vinyl discs between 1974 and 1980, they seemed a revelation. Neville Marriner and his comparatively small ensemble had gone back and found Rossini's original, lighter orchestrations for these works and come up with as delightful renditions as anyone had ever heard in modern times. Today, to be able to purchase all of them in a single three-CD set at far less cost than they first sold for is a bargain, indeed. And even though Philips as a company is long gone, one can still readily find the Rossini set on-line.

The program does not follow the order in which Philips first released the overtures on LP but, rather, it starts with the most popular overture, William Tell. This is a little unfortunate, as it is the famous William Tell overture that probably most benefits from the brass and bass drum that we are used to but are missing here. Not to worry, though; like the rest of the performances, the piece moves with grace and surety.

The overtures that truly sparkle, however, are Il barbiere di Siviglia, La Scala di seta, Signor Buschino (with its desk tapping), and especially my favorite, L'Italiana in Algeri. In my own experience and to my ears, only the Orpheus Chamber Orchestra on modern instruments have more recently equalled these efforts for sheer energy and enthusiasm, and not even they can match the Academy for overall grace and refinement. 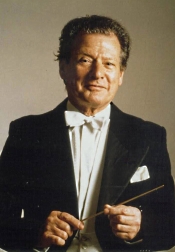 What's more, Philips did everything they could back then to ensure that they afforded Marriner and his players the very best analogue sound. What this means is that they eschewed some of the usual concert-hall resonance they preferred, clarifying the stereo sonics to such a degree I thought for years these recordings were among the cleanest I had ever heard. They are never dry, however, and the light ambient bloom that permeates the recordings makes the presentations sound quite realistic.

Which brings up a final point. The first of the original discs, containing the overtures recorded in 1974, Philips miked in four-channel Quadraphonics but issued in two-channel, and PentaTone Classics issued a hybrid SACD of them that appears to sound a tad clearer to me in their stereo presentation. If one is looking only for the most-popular Rossini overtures, if one has an SACD player, and if one maybe has deep pockets, the PentaTone disc is surely a strong consideration. But, otherwise, for many folks this Philips Trio offering still seems hard to resist.