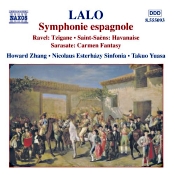 The composers are French and Spanish. The violinist was born in China. The conductor is Japanese. The orchestra is Hungarian. Naxos pressed the disc in Canada. And Naxos originated as a German-based operation, pressing most of its discs in Germany. They don't call Naxos an international company for nothing.

Anyway, you could do a lot worse than spending what Naxos or a secondhand vendor asks for this splendid reissued disc of French and Spanish music. The young violinist, Howard Zhang, was born in Shanghai in 1984, and moved to the U.S. in 1989. He is dynamic and virtuosic; the accompaniment from the Nicolaus Esterhazy Sinfonia under the direction of Tajuo Yuasa appears fairly refined and accommodating; and, best of all, the sound is among the best Naxos has done. 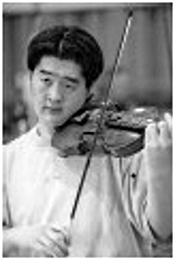 The Symphonie espagnole is especially engrossing, not only because it doesn't get recorded nearly as often as it should but because Mr. Zhang plays it so enthusiastically. Despite its title, the so-called "symphonie" is actually a concerto for violin, and as such it amply displays the violinist's prowess with his instrument. Zhang is quite brilliant, and if his fervor sometimes overrides his subtlety, well, it's the spirit that counts. The performance is full of energy and verve, directly and simply communicated.

The Ravel, Saint-Saens, and Sarasate pieces show Zhang's less passionate side as well, yet still display a good deal of showmanship. While there are already many fine recordings of the Tzigane, Havanaise, and Carmen Fantasy in the catalogue, Zhang's interpretations are at least as persuasive as most of them.

Naxos's sound is wide ranging and reasonably natural. It was only when I put on an old disc of the Symphonie with Tortelier, Fremaux, and the City of Birmingham Symphony Orchestra (EMI, 1976) that I noticed the extra clarity, definition, and bite in the older recording. But given that the older disc, issued on EMI's Studio label, no longer seems available and is probably hard to find, I have no hesitation recommending this Naxos issue at an affordable price.

Email ThisBlogThis!Share to TwitterShare to FacebookShare to Pinterest
Labels: Lalo