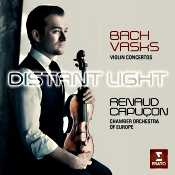 Right off, you have to ask the question, Why would French violinist Renaud Capucon choose to pair Baroque composer J.S. Bach's two solo violin concertos with a violin concerto by modern composer Peteris Vasks (b. 1946)? I mean, any potential buyer of the album familiar enough with classical music to want the Vasks piece would surely already own multiple favored copies of the Bach works. And the price of the disc seems awfully high for the Vasks concerto alone.

So, let's allow Mr. Capucon to tell us in his own words why he chose the coupling he did: "A gap of almost three centuries lies between these two composers. One was born in Germany in 1685 and the other in Latvia in 1946. Their music is very different. But in both cases the music has: purity of line, apparent simplicity, celestial harmony. Little remains to be said about Bach, but a great deal remains to be said about Vasks. Bringing them together on the same album seemed natural to me. Like an echo: one responding to the other. These works have in them a search for the absolute as well as moments of Grace. This is music which brings calm, which revitalizes, which gives hope. And the most striking thing of all is the humility of these two composers in the service of beauty." Fair enough.

Anyway, Capucon begins with the familiar: Bach's Violin Concerto No. 2 BWV 1042 and the Violin Concerto No. 1 BWV 1041. Capucon takes the outer movements at what I would describe as elegantly quick tempos, with an emphasis on consistently gentle rhythms. No breakneck speeds here nor any unnecessary lallygagging. The effect is radiant and sweetly glowing, at the same time vibrant and alive. The slow inner movements are abundantly expressive, too, while occasionally lacking in the lyrical grace I've heard from a few other performers. Nevertheless, these are fine interpretations, always reminding us of Capucon's poignancy and virtuosity. If it was purity and simplicity the violinist was after, I'd say he succeeded.

One of the other delights of the program is the work of the Chamber Orchestra of Europe. Established in 1981 and based in London, they have quickly become one of the finest small ensembles in the world. What's more, with over 250 recordings to their credit, they have become one of the most well-known chamber orchestras around. The ensemble seems always to be at one with the soloist, whether they're actually playing along with him or not. Their accuracy and control are remarkable, their understanding of the music and its atmospheric shadings always in evidence. 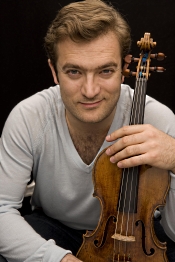 Then we get the companion piece, Vasks's Concerto for Violin and String Orchestra "Distant Light," composed in 2003. We learn from a booklet note that Vasks and his family suffered a great deal because of the Nazi and Soviet occupations of his country, and that his music often reflects that experience. We also learn that fellow Latvian violinist Gidon Kremer greatly influenced him, and Vasks dedicated "Distant Light" to him. The work should evoke and underline distant memories, some of them pleasant, many of them melancholy if not downright grave.

I'm sure more educated ears than mine could hear the similarities between the Vasks and Bach concertos, but, alas, I could not. This isn't to say, however, that I didn't enjoy the Vasks concerto a good deal. With a commanding performance from Capucon, the music alternates between mostly quiet, contemplative, introspective moods and more nervous, sometimes folk-inflected states.

Producers Alain Lanceron and Michael Fine and engineer Jin Choi recorded the album at the Darius Milhaud Conservatory, Aix en Provence, France in December 2013. With this recording you get clarity above all. The ensemble is small, so it shows up with excellent definition and detail, and the violin, while a tad forward, sounds well integrated with the group. In other words, the soloist is clearly in charge sonically but not dominating. There is a modest degree of room resonance, plus a reasonable sense of depth that also help the music to appear lifelike. Overall, the sound is smooth, moderately warm, and only a trifle bright.