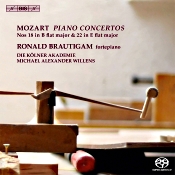 After reviewing as many familiar, basic-repertoire items as I have from a variety of great artists over the course of some forty-odd years, it's hard to tell one from another anymore. Any new recording has to have something very special to offer in the way of performance or sound in order to make me sit up and take notice. This new album from pianist Ronald Brautigam with Maestro Alexander Willens and the Cologne Academy made me sit up and take notice.

Dutch pianist Ronald Brautigam (b. 1954) is probably best known for his performances of Beethoven pieces on fortepiano. Here he's working with piano concertos by W.A. Mozart (1756-1791), but it's close enough, and again he's performing on the fortepiano, forerunner of the modern grand piano and a sort of evolution up from the harpsichord. It hasn't quite the rich sonority of a modern grand piano but isn't as clinky-clangy as a harpsichord. Above all, the fortepiano provides a good, clear piano sound; besides which, Mozart himself probably played the instrument, the fortepiano being used throughout most of the eighteenth century. Accompanying Mr. Brautigam is the Cologne Academy, a small ensemble of several dozen or so musicians dedicated to music of the seventeenth to twenty-first centuries and playing on both period and modern instruments, depending on the material.

Audiences are pretty familiar with both concertos on the disc. First up is the Piano Concerto No. 18 in B flat major, K. 456, which Mozart wrote in 1784. It's a fairly joyful work, and Brautigam plays it that way, with enthusiasm and quiet passion. Brautigam shows a light touch throughout the concerto, yet it's a lively lightness, full of sparkle and energy. He and Maestro Willens always seem to pick the right tempos, never going overboard to prove their historical accuracy yet keeping the pace vigorous at all times. Everything about the performance, in fact, appears just right.

The coupling is Mozart's Piano Concerto No. 22 in E flat major, K. 482, written in 1785. Although only a year separates the two concertos on the program, No. 22 sounds the more mature and certainly the more weighty. No. 22 seems more inventive than No. 18 as well, with Mozart varying the overall texture of the sound more than usual. Indeed, even the soloist's entrance into the proceedings seems to have little to do with the introduction, the composer varying things so much. It's both enterprising and refreshing. More important is that neither Brautigam nor Willens tries to overemphasize Mozart's intentions, keeping everything on a even keel. Still, they preserve all of Mozart's character and color in the piece. 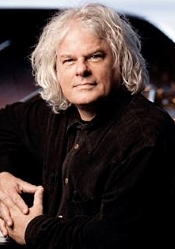 Mozart's father remarked that at the première of No. 22 the audience demanded a repeat of the second-movement Andante. One can understand their appreciation for the music's pathos and passion, although Brautigam never strives for any overt sentimentality here. The finale goes as expected, full of boundless good cheer as it bounces merrily along, Brautigam lending the affair a delicate virtuosity.

Producer Ingo Petry and engineer Thore Brinkmann recorded the concertos at the Deutschlandfunk Kammermusiksaal, Cologne, Germany in December 2012. I listened to the two-channel SACD stereo layer of this hybrid, two-channel/multichannel SACD and thought the sound was excellent. As usual with a BIS recording, there is plenty of room resonance to provide a realistic setting, yet not so much that it clouds the transparency of the music. The orchestra appears well spread across the sound stage, with good depth and air to the instruments. When the fortepiano enters, it shows a firm presence and a well-integrated position relative to the ensemble, not too close to the listener or too distant. Some people might prefer a sharper, more-detailed sound, but this is more reminiscent of what a person would hear live, so I'm all for it (especially when at the same time we don't have to put up with the noise of a live audience).