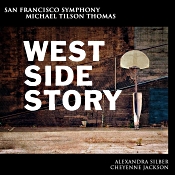 With music by Leonard Bernstein, book by Arthur Laurentis, choreography by Jerome Robbins, lyrics by Stephen Sondheim, and inspiration by Shakespeare's Romeo and Juliet, West Side Story opened on Broadway in 1957 and has been a staple of the American musical stage ever since. The question is how many recordings of it one needs. We already have the original Broadway and original motion-picture recordings on Sony, Bernstein's 1985 operatic studio recording on DG, a 1997 complete studio recording on Jay Records, a 2009 Broadway cast recording on Sony, and an excellent presentation from the Nashville Orchestra on Naxos, among others I've probably forgotten. Now, we have a live concert recording from Michael Tilson Thomas, the San Francisco Symphony, and a fine assembly of singers. Is it worth one's time and money? Yes. And a qualified no. Let me explain.

Both leads are comfortable in their roles, even if Jackson's voice didn't strike me as that of a tough street hood. He sounds like a pleasant, clean-cut, down-home young man, maybe a character from Oklahoma or The Music Man rather than a New York City delinquent in West Side Story. Anyway, it's a minor concern, and Ms. Silber's portrayal of Maria more than makes up for it. She's most persuasive, providing the production a much-needed poignancy. Indeed, she tends slightly to dominate her duets with Jackson.

The rest of the cast function well in their roles, too, especially those performers voicing the Puerto Rican contingent, who tend to get the more-colorful musical numbers in the score.

Then, it goes without saying that the San Francisco Symphony do their part admirably. OK, I admit a bias: I grew up in the San Francisco Bay Area and remember first hearing the orchestra around 1955. So, yes, I've always thought they were good; but, really, they seem to get better with age. Today, they can hold their own with the finest ensembles in the world for richness, sonority, balance, and precision. 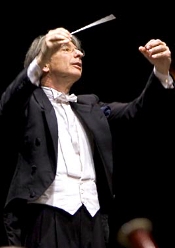 The qualifications? First, the production comes in an elaborate two-SACD set, enclosed in a fancy hardbound book with a 100-page insert of notes and lyrics. That may seem like a great deal, and it is, but it comes at a price: a hefty cost that may be a bit much for some listeners to bear, especially if they already have one or more of the competing releases. Second, what we get from Tilson Thomas is a concert production; that is, without dancing or dialogue. Well, doing without the dancing is fine with me on an audio recording; we couldn't see it, anyway. However, some listeners might prefer hearing the dialogue as well. Third, it's a live recording, with all the attendant sound issues that brings: see below. And fourth, not everyone will take to Tilson Thomas's fairly literal translation of things. While, as I said, the singing is quite good, there isn't to me as much spark in the production as I hear in the Broadway cast, motion-picture, and Nashville albums. Not that Tilson Thomas is exactly stiff; he just seems more attuned to refined musical elegance rather than the raw energy of the Broadway musical stage. Everything under Tilson Thomas seems too exact, too proper, too well articulated, too calculated for the character of the music. Nevertheless, the latter objection is largely a matter of taste, so other listeners will love the production for its polish.

Total playing time on the two discs is about 123 minutes, and Tilson Thomas admits they did not include every note; they omitted change-of-scene music, for instance, and, of course, the dialogue. By comparison, the movie version is 151 minutes, almost a full half hour longer.

Producer Jad Vad and engineers Roni Joles, Gus Polleck, and Jonathan Stevens made the hybrid two-channel/multichannel SACD recording at Davies Symphony Hall, San Francisco, California in June and July 2013; and SFS Media released it in 2014. In order to overcome the presence of a live audience, the miking is fairly close. Still, it provides a good deal of detail, definition, and dynamic impact, with a surprising amount of warmth as well as spacial dimensionality in the two-channel SACD layer to which I listened. The only real problem is rather small: voices do not always seem well integrated with the orchestral support. They're too far out front. Still, this arrangement also provides excellent vocal clarity, again with a welcome touch of ambient warmth. On loudest passages one notices a trace of steely edge, although it isn't much. Then, on a final note, there is very little audience noise and no applause. Thank goodness.

Email ThisBlogThis!Share to TwitterShare to FacebookShare to Pinterest
Labels: Bernstein