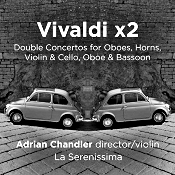 First, the good news: There isn't a Four Seasons in sight.

The bad news? There isn't any. As always with director and violinist Adrian Chandler and his period-instrument band La Serenissima ("most serene," as in the nickname for Venice), everything is in perfect order. The ensemble is clean and precise, yet lively and stimulating. "Vivaldi x2" is another outstanding release in La Serenissima's fine catalogue of recordings.

This time out the group's gimmick is to include as many of Vivaldi's concertos as possible written for two primary instruments. These include

As each concerto lasts from six to about twelve minutes, it gives the album a total time of over seventy-five minutes. That's close to a full house, the upper limit of a Red Book CD.

Anyway, Chandler and his crew are no namby-pamby HIP ensemble. They attack each line with vigor and enthusiasm. Yet despite their zest for the music making, they are as exacting in their execution as anyone. Take the first concerto, for instance, the Concerto for Two Horns. There's nothing fussy about it; it brims over with life. Still, the slow middle movement shows sensitivity and grace, and then it ends in a note of pure effervescence.

And so it goes. Vivaldi wrote a busload of double concertos, so the eight on this disc are but a small sampling. Perhaps this portends more such material from Chandler and La Serenissima. Let us hope so.

However, if I have any minor quibble about the album, it's one I've had about hundreds of CD's and LP's over the years: The cover art. I'm probably alone in this, but I like looking at a recording's cover art while enjoying the recording's music. When a cover picture conjures up images of the music's content, I'm pleased, as with La Serenissima's "The French Connection" and "A Tale of Two Seasons." However, when it's as dull as the picture of two cute little cars ("x2") on the present black-and-white cover, it might as well be nonexistent. Full-face portraits of an album's primary artist annoy me as well: photos of Alfred Brendel or Herbert von Karajan or whomever; I don't care.

Let me elaborate: Many years ago, Philips released an LP recording of Schubert's "Trout" Quintet by an augmented Beaux Arts Trio. The album featured a painting of an old mill with a water wheel beside a bucolic scene of a running stream. It was beautiful; it inspired one to appreciate the music all the more. Then Philips issued the recording on CD and changed the cover art to some drab, generic abstract fish painting (and later to a trio of jumping fish). When Pentatone re-released the album on SACD, they did likewise, failing to use the original cover art and employing some nondescript water imagery. So I looked on-line for a picture of the original Philips LP artwork, found it, copied it, re-sized it, sharpened it, spruced up the colors, and then printed it out and inserted it in front of the CD booklet. My enjoyment of the music improved.

Simon Fox-Gal produced, recorded, and edited this Vivaldi recording, which he made at Cedars Hall, Wells, Somerset, UK in February 2018. The sound is dynamic, a little close, clear if a tad soft, slightly reverberant, and detailed but never hard-edged or strident. Certainly, the hall is in evidence here, which makes the presentation all the more realistic. There is also a moderate depth to the image, so we get a sense of space as well as breadth, with plenty of air around the instruments. Nicely done.