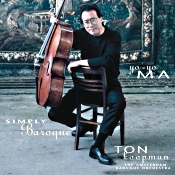 Apparently, by 1999 Yo-Yo Ma had run out of basic cello repertoire to record and began going in various different directions. For instance, he did a successful album of tango tunes, another of bluegrass, and yet another of contemporary music. The novelty this time out is that he plays on a period Stradivarius cello (1712) with Ton Koopman's period-instruments group, the Amsterdam Baroque Orchestra.

They play about a half an hour of short Bach transcriptions, "Jesu, Joy of Man's Desiring," "Air on a G String," that kind of thing, and a pair of Boccherini cello pieces, the Concerto in G Major and the Concerto in D Major.

While the Bach is undoubtedly appealing, I found it a bit fussy and over-refined. Ma's playing is ravishing, yet he seems to drain some of the life from the works in the name of beauty. On the other hand, the Boccherini is another world entirely. Maybe it's just that we hear more Bach pieces compared to Boccherini that comparisons are more harsh in the Bach. Still, I don't think I have ever heard works by Italian composer and cellist Luigi Boccherini (1743-1805) played with more elegance, more fluidity and grace, more expressiveness, or more subtle nuance. There is no loss of vitality here; the pieces are at once alive and enlightened. Certainly, Maestro Koopman's robust style helps both Bach and Boccherini, but he, too, adds a note of sensitivity to the latter.

The booklet note says a lot about Ma's having to adapt both his instrument and his performing technique to meet the demands of period music. It appears, instead, that the eighteenth century was more than willing to conform to Ma's style. The combination provides a unique listening experience, a step beyond what the usual period-instrument player might bring to these concertos.

Sony's sound (recorded at Stadsgehoorzaal, Leiden, Netherlands in 1998 and digitally remastered in 2009) is likewise good. Recorded in Holland's Stadageboorzaal Concert Hall, the acoustic is pleasantly resonant, helping to make the sonics sound realistic without in any way distorting them.  The results are smooth, natural, and reasonably clear, with a good degree of depth as well as breadth to the stereo image. Ma's cello is dominant, to be sure, but it never completely overpowers its orchestral accompaniment.

This is a disc that scores on almost all counts, lightweight but recommendable.