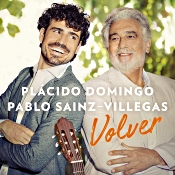 As one of the world's greatest tenors has aged (as of this writing, Placido Domingo was seventy-seven), he hasn't slowed down. True, he's now singing mostly popular rather than operatic material, and he's matured into more of a baritone range than tenor, but the voice is still rich and robust.

This time out, he's doing mainly famous Iberian and Latin America songs, accompanied by Spanish classical guitarist Pablo Sainz-Villegas, who also does three guitar solos during the program. This is Sainz-Vellegas's first album for Sony, by the way, and somewhere around the eight-hundred-and-first album for Domingo on a variety of labels.

If there is anything amiss with this roster of selections, it's its skimpy length. With only twelve selections and about forty-five minutes of total playing time, the album harkens to pop-music practice. I suppose it's enough to satisfy Domingo's fans, but it's hardly a good value for the dollar, given that a compact disc will hold almost eighty minutes of music. Well, OK, maybe I'm just used to classical music programs, which generally fill out a full disc of material.

Anyway, Domingo's legion of followers will find the album highly satisfying. Most of the songs are well known, and Domingo sings them in fine, full voice. More important, he sings them with characteristic emotion. These are heartfelt realizations, beautifully executed and both tenderly and passionately rendered. What's more, Sainz-Villegas's attendant guitar work is always an affectionate supplement to Domingo's voice, never an overshadowing factor. Plus, Sainz-Villegas's well-spaced solos add charming interludes to the program.

Producer and engineer Rafa Sardina recorded the album at AfterHours Studios and Watersound Studios, Los Angeles; Avatar Studios, New York; Wanna Music LLC, Miami; Metropolis Studios, London; 360 Global Media, Madrid; Ion Studios, Buenos Aires; and Villa Manipura Studios, Acapulco. Oddly, on most tracks the voice appears located well behind the guitar, which is quite close up, and additional instrumentation (violins, violas, cellos, flutes, oboes, clarinets, bassoons, trumpets, horns, drums, and double bass, depending on the selection) is so soft as to be hardly noticeable. These inconsistencies aside, Domingo's voice and the guitar are very well defined, without being hard or shrill.