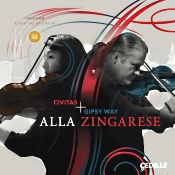 First things first: Who are the two ensembles involved? The Civitas Ensemble are, according the booklet note, four of Chicago's top musicians--Yuan-Quig Yu (violin), Kenneth Olsen (cello), Winston Choi (piano), and Lawrie Bloom (clarinet)--who formed in 2011 as a chamber music group dedicated to presenting "engaging live performances of new and traditional works, inspiring a young generation of classical musicians, and bringing the healing power of music to those with limited access to live performances."

Pavel Sporcl "is one of the world's most prolific violinists and high-profile recording artists." In 2008, "he started playing with Gypsy musicians and later formed Gipsy Way Ensemble, who have stayed in its current formation since 2012, with Ensemble members Zoltan Sandor, viola; Jan Rigo, double bass; and Tomas Vontszemu, cimbalom." Together, they have played all over the world, and in 2015 Sporcl's civic-minded approach and advocacy for classical music earned him the Czech Republic's Medal of Merit.

And what's with the title, "Alla Zingarese"? Well, "All Gypsy," for starters, or, better, "In the Style of Gypsy Music." However, the selections aren't quite all gypsy, as we hear many of them in arrangements by various non-gypsy people, thus making them as the inside cover notes "a fusion of Western classical and gypsy music...an exploration of what happens when distinct cultural and musical traditions join together."

Here's a rundown on the program:

As noted above, the music is a blend of traditional gypsy tunes and classical instruments and playing techniques. The opening arrangement of the Brahms Hungarian Dance No. 1 is a good example. One can sense both its classical and folk roots, with instrumentation to complement both sides. Of course, whether this kind of crossover material will appeal to either camp is open to question. The point is that the music can be infectious and highly entertaining if you give it a chance. I'm not sure it's trying to make any point, except, perhaps, that every musical medium can be fun, even when they're mixed.

Anyway, I found the entire album captivating, and I especially liked the use of the cimbalom, a type of zither or dulcimer. I found myself wanting to hear more of it. If I really had to choose, though, I think I enjoyed the selections by the two groups together best of all, if only for the added richness of the sound they produced. Still, all of this music is addictive, rollicking, yet sensitively performed by musicians who obviously cherish what they're playing.

Producers Steve Rodby and James Ginsburg and Cedille's ace engineer Bill Maylone recorded the album at the Chicago Recording Company in May 2017 and the Reva and David Logan Center for the Arts at the University of Chicago in August and September 2017. The resultant sound is smooth and warm, with enough resonance for comfortable listening and enough transparency for good detailing. These are small ensembles, so each player stands out in clear relief, yet not so vividly as to seem unreal. As always with Cedille, the sound is natural, realistic, as opposed to overtly audiophile.

Email ThisBlogThis!Share to TwitterShare to FacebookShare to Pinterest
Labels: Gypsy