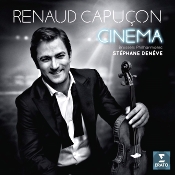 At last count, there were approximately 19,382,475.3 recordings of film music in the catalogue. So, any new release has plenty of competition. What makes this one any more special than the rest? Well, mainly, it's French violinist Renaud Capucon.

According to his bio at Wikipedia, Capucon (b. 1976) entered the Conservatoire à rayonnement régional de Chambéry at the age of four, then the Conservatoire national supérieur de musique et de danse de Paris at the age of fourteen. Three years after that, having completed his studies, he won first prize in both chamber music and violin. There followed several international competitions before he joined the European Union Youth Orchestra and then the Gustav Mahler Youth Orchestra as first violin. About the same time, he began playing as a chamber musician and launched a solo concert and recording career. On a side note, after playing a Vuillaume, a Guadagnini, and a Stradivarius violin, in 2005 the Banque de Suisse Italienne BSI loaned him a Guarnerius, the "Panette" of 1737 that had once belonged to Isaac Stern.

And what's he up to on the present album? He's playing film music (a healthy nineteen tracks) with the accompaniment of Maestro Stephane Deneve and the Brussels Philharmonic. As Capucon explains it, "Playing music from the film soundtracks that mean so much to me has allowed me to tell my own story. A number of different tales end up woven together here, inspiring the best story of all--the one you'll tell yourself as listen to this album."

Here's a rundown of the selections:

The themes from "Cinema Paradiso" and "The Mission" are good places for Capucon to start the program because they emphasize the sweetness of his playing style. Capucon glides through them with consummate ease and refinement. He maintains a total control of his violin while asserting a total control of the music. OK, admittedly, these are probably not the most-demanding scores Capucon has ever had to play, but, still, to produce such lush, lovely tones is no easy matter. Maestro Deneve and the Brussels Philharmonic give him an equally lush and lovely support.

It's hard to pick out favorites among the many tunes. Most of the music runs high to heavy sentiment and plush romanticism, so it almost seems one of a sort after the first half dozen tracks. "Life Is Beautiful," the "Romance" from  "The Adventures of Robin Hood," and "The Tall Blond Man with One Black Shoe" tend to liven up the proceedings a bit. However, for the most part, things remain on the dreamy, nostalgic side, though never veering too far into the maudlin or sappy. I admit I have a special affection for "Amelie," "Mood River," "Summer of '42," and "The Godfather." Indeed, if really pressed I'd say "The Godfather Theme" was the single most splendid thing on the disc, with Capucon singing out the notes on his violin as though performing grand opera.

In all, the album demonstrates a poignant piece of musicianship and makes for winsome, engaging, easy listening.

Producers Alain Lanceron and Michael Fine and engineer Jean-Marc Laisne recorded the music at Flagey, Brussels, Belgium and Ferber Studio, Paris, France in June and July 2018. The sound is as sweet and gentle as much of the music. The violin is a bit too close for the orchestra behind it, but since this album is really a showcase for Capucon and his instrument, we perhaps might have expected that. When the orchestra does come up strongly, though, it tends almost to engulf the soloist in a soft, billowy reverberation. Fortunately, such occasions are few. Mainly, this is warm, ultrasmooth sound, not particularly transparent or dynamic but comfortable.