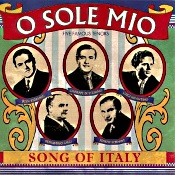 Debate still rages among opera buffs about whether today's tenors are as good as those of the past. This collection, "Song of Italy," gives us five great singers of yesteryear singing famous Italian songs. The monaural recordings date from the mid 1920s to the late 1940s.

At the top of the ladder are Beniamino Gigli (1890-1957), with a voice of velvet smoothness, infinite flexibility, and seemingly limitless power; and Swedish-born Jussi Bjorling (1911-60), who, like Gigli, was considered a natural successor to Caruso. He had a voice of soaring lyricism that made his rivalry with Gigli comparable to the Pavarotti-Domingo contests of later years.

On a slightly less-exalted level is Giuseppe Di Stefano (1921-2008), who displays his usual penchant for dramatics, not an undesirable trait in the world of opera. Then there is Joseph Schmidt (1904-1942), who is something of an enigma. He provides perhaps the most expressive, if not the strongest, voice of all; yet his diminutive size (he was not quite five feet tall) kept him from appearing in opera on stage. Bad luck. Finally, represented by only one number is Luigi Infantino (1921-1991), a singer known as much for his phonograph recordings in the forties and fifties as for his personal appearances.

The disc includes a generous selection of twenty-three songs, including the expected "O Solo Mio" done in three different renditions--by Bjorling, Gigli, and Schmidt. I preferred Bjorling by a hair over Gigli, and Schmidt a distant third. Other songs include "Torna a Surriento," "Santa Lucia," "Maria, Mari," "Piscatore e Pusilleco," "Casarella," and many others.

The sound, as one might expect, is variable. The EMI remastering engineers have used enough noise reduction to eliminate any serious signs of hiss, making the top end inevitably soft but rendering the voices quite listenable. In a few cases, however, it is more the mono sound than anything else that betrays the age of the recordings.

In all, the disc provides an excellent showcase of vocal art and popular entertainment.