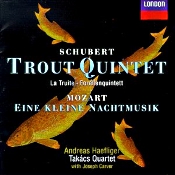 I once wrote that there were as many "Trout" recordings in the music world as there were fish in the sea. If I didn't, I should have. Sometimes we wonder why record companies keep releasing the same tired, old stuff over and over again, but in the case of Schubert's "Trout," there is ample justification. This 1999 recording will appear to some listeners as sparkling with freshness and to others as infuriating in its garden-variety plainness. Whatever, it's another interpretation to consider.

With Andreas Haefliger, piano, and Joseph Carver, double bass, the Takacs Quartet take on three popular chamber pieces from Schubert, Wolf, and Mozart. Overall, they do acceptable work, but whether any of the performances are better than old favorites in this repertoire I find doubtful.

The Takacs's take on Franz Schubert's Piano Quintet in A major "Trout" begins more intensely than most, with rhythms well sprung and accents keenly punctuated. It is a far cry from the leisurely but for me more charming "Trout" I reviewed a year earlier by Alfred Brendel and company (Philips). The next two movements appear far more conventional but still fairly expressive. The central set of variations is given some persuasive turns, although in this regard they are not as infectious as those in my favored recording from an augmented Beaux Arts Trio (like the Brendel, also on Philips but also on Pentatone).

It is in the finale, however, that the greatest controversy may arise. The Takacs ensemble take it much faster than usual, but never breathlessly so. In fact, it seems just right for the moment, and comparisons to the other recordings I've mentioned find those performances almost hopelessly dragging. Of course, they're not. It's the danger of comparisons; taking bits and pieces out of context makes them appear unfairly different. There is obvious charm in taking things slowly, yet the exhilarating pace of the Takacs group creates its own delights. And as for what is actually "right," Schubert's only indication for the last movement is Allegro giusto (cheerful, joyful, usually fast, and fitting or just right), which is a pretty broad tempo marking, allowing for a lot of interpretative leeway. At least we know Schubert wanted something a little fast and lively, and he gets it here, for better or for worse.

As for couplings, Hugo Wolf's diminutive Italian Serenade is a serviceable transition into Mozart's familiar Serenade in G major, "Eine kleine Nachtmusik." The Mozart, too, is given a much more sprightly reading than we commonly hear and combined with the added clarity of a small group makes listening to this piece a fresh, if not entirely rewarding, experience. Again, the approach Takacs takes will annoy those people whose expectations are more traditional, while others will find all three pieces original and more than satisfactory.

When Decca discontinued their London label in America, they repackaged much of their catalogue under the original Decca name, but they never seemed to have gotten around to this issue. Nevertheless, I see a number of London copies still around under the old designation. Anyway, Decca's sound is not always as well defined as I would have liked, but it is well balanced, particularly front to back, and it adds to the disc's enjoyment.