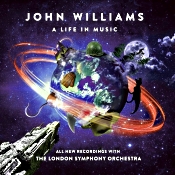 You may remember that I've mused upon this subject before: namely, asking the question, What orchestral music from the mid-twentieth century onward will people still be listening to a hundred or more years from now? As most of the classical repertoire even today is comprised mainly of Baroque, Classical, and Romantic music, it doesn't leave a lot of room for most modern material. Then I think of American composer, conductor, and pianist John Williams (b. 1932). Granted, the majority of Mr. Williams's work is in the field of film scores, for which he has won numerous awards, and most listeners probably aren't even aware of his concertos, symphonies, and chamber pieces. But the film scores may be enough; indeed, many of them may already be classics, if not strictly of the classical kind. And when audiences go to an orchestral concert centuries from now, they may yet find the name "John Williams" on the program.

The current album takes its place among a host of such discs that pay tribute to John Williams's most-famous film scores. This one gives us ten of his most-beloved works, conducted by Gavin Greenaway and played by the orchestra that performed most of it for the movie soundtracks, the London Symphony. By now, they must know this material by heart.

The tracks include, as I say, some of the most-popular Williams stuff you can name, selections from Star Wars, Jurassic Park, Harry Potter and the Sorcerer's Stone, Raiders of the Lost Ark, E.T., Schindler's List, Hook, Saving Private Ryan, Jaws, and Superman. It helps that Maestro Greenaway is no stranger to film himself, having conducted the soundtrack music for such things as Pearl Harbor, Gladiator, The Thin Red Line, and Solo: A Star Wars Story. Here, he does up the music of Mr. Williams in find style.

Of course, any John Williams fan is going to have his or her favorites, and mine include the opening number, the familiar Star Wars main title theme. Greenaway plays it with plenty of pizzazz and bravura, so I'm sure Williams would applaud it, too. And one can easily see in it the inspiration Williams got from people like Erich Wolfgang Korngold, who was no doubt inspired in turn by Richard Strauss, who was probably inspired in part by Franz Liszt, and so on.

The far more-gentle theme from Jurassic Park gets a sweet, unaffected treatment that I appreciated. "Hedwig's Theme" from the first Harry Potter movie is likewise amiable and winning. Then the "Raiders March" takes us back to the daring brilliance of the opening track, a kind of spiritual uplift from an old friend, played by Greenaway with an abundance flourish and panache as well as sensitivity during the quieter moments.

And so it goes. The "Flying Theme" from  E.T. has a sprightly cadence; the theme from Schindler's List exhibits an appropriate melancholy, with its longing violin solo; "The Flight to Neverland" from Hook rollicks along at a splendid pace; and the "Hymn to the Fallen" from Saving Private Ryan establishes an elegiac tone. Then, everybody's favorite "Shark Theme" and the heroic "Superman March" close out the show with an imposing flair.

It's all quite a lot of fun, well performed and well recorded. I can't imagine anyone who hasn't seen most of these movies, but even if one hasn't, the music is inspiring and well worth the time. Time and again. The album does have one drawback, though: It's only a little over fifty minutes long, and I'm sure the producers could have found a lot more of John Williams's work worth recording. Still, what we have is good enough.

Finally, as this is a tribute album, for each of the selections a member or members of the LSO say a few words in the booklet notes about Mr. Williams. They are touching remembrances of the work and legacy of a great composer.

Producers James Morgan and Juliette Pochin and engineers Geoff Foster and Tony Cousins recorded the music at Air Lyndhurst Studios, London, UK. Decca Records and Classic FM released the album in 2018. The results of their work sound like a big studio production, and it's exactly what this music needed. Yes, it is big, big, big. Dynamic, wide-ranging, fairly well imaged, with a moderate orchestral depth and a good, balanced stereo spread that leaves no hole in the middle. In short, it sounds like a realistic concert-hall performance, which is what I'd imagine a lot audiophiles look for in a recording, even if it isn't the topmost in ultimate transparency.

Email ThisBlogThis!Share to TwitterShare to FacebookShare to Pinterest
Labels: Williams.John