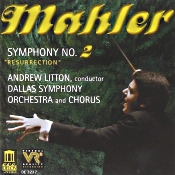 Mahler's Second Symphony "Resurrection" was his first really massive work, not only long but incorporating the talents of a large orchestra, soloists, and chorus. Such size became his eventual trademark, the quintessential "big, Mahler symphony." In order for any new recording to do it justice, the performance must stand up to at least two towering predecessors, those of Otto Klemperer and Sir Simon Rattle, both on EMI. Klemperer imparted a feeling of monumental grandeur to Man's triumph over death, while Rattle provided an even greater sense of spirituality in the process. Andrew Litton does not ascend these lofty peaks without the difficulty of comparison; he comes off second best.

For me, Litton is in trouble from the beginning. He takes the opening Allegro, a signature funeral march for Mahler, much too slowly. Certainly, a funeral dirge should be solemn, but it should never drag. This one dawdles along at what seems an interminable pace without much recourse to any punctuation of lines; there is little sense of drama or scope in the reading of this initial movement. Then things improve. Litton gives the three middle sections a more affecting treatment, never mind that the second segment, a Landler or slow waltz, as Mahler wrote it seems worlds apart from the rest of the work's symphonic content. The soloist performs well in the fourth movement, the famous "Urlicht" song from Des Knaben Wunderhorn. The major letdown, however, is in the finale, which has nothing like the elation and exaltation it demands. Rather, Litton just seems to let the music fall as notes from a page; it's not lifeless but not exhilarating, either, in spite of a full chorus, soloists, and organ thundering behind the orchestra.

Delos present the symphony with their Virtual Reality processing, whereby the music was originally recorded in multiple channels and mixed down into two for playback either on regular two-channel stereo equipment or in various multichannel formats like Dolby Pro Logic. I did not try it in surround mode as my multichannel home theater system is not really up to the musical standards of my separate stereo music system. I rather suspect, though, that some of the sound's thicker qualities in regular playback are due to its abundance of multiple resonances.

Anyway, Delos recorded the symphony live at the Eugene McDermott Concert Hall of the Morton H. Myerson Symphony Center, Dallas, Texas in September 1998. The sound they obtained is quite natural in frequency response and smooth in all extremes, but it lacks the overall clarity of the much older Klemperer disc I've mentioned. The chorus in the finale of the Delos, for example, sounds like a soft blur. Like many recordings of the Second, this one is spread out over two discs, with the first movement on disc one. (Klemperer is complete on one disc, another point in his favor.) But the turnover is not as inconvenient as one may think, considering that Mahler himself recommended a five-minute break at this point. Delos offer an unusually high number of tracking points within each movement, especially helpful in a work so long.

Surely, the peoplel at Delos were aiming for spectacle with their Virtual Reality recordings, and just as surely they achieved it. They have also offered some of their things on DVD, although I have not heard their fully discrete discs in the multichannel medium.