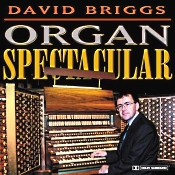 The sell here is that Delos Records bills the disc as the "Inaugural recording on the world's largest church organ." English organist and composer David Briggs plays the organs (there are two--one in the back of the church and one in front) of the First Congregational Church of Los Angeles in six compositions demonstrating the power of the mighty beasts.

Producer and recording engineer John Eargle writes that the Dolby Surround technique he used "enhances the listening experience by reproducing an ambient sound field more closely approaching that of a musical performance in a reverberant space." I have the utmost respect for Mr. Eargle's work, but that "reverberant space" he speaks of needs to be toned down on this recording--way down. The sound is appropriately big all right: big, big, and more big, but it's also soft and distant and somewhat unfocused. I have to admit here that I am not a fan of solo organ music to begin with, so, yes, I'm showing my bias. Maybe this is exactly what the world's largest church organs do sound like in this church. However, it isn't like any other organ recording in my collection, which all sound much more clearly defined in spite of hall ambience; nor is it like any live church organ music I've ever experienced, like, say, the organ of Grace Cathedral in San Francisco, with which I'm fairly familiar. Of course, it's only one organ, not two.

Anyway, of the six works performed on the disc, it's hard to tell why Mr. Briggs chose his own improvisations on an old Lutheran chorale, "Ein Feste Burg," to open the program. It is a twenty-three minute work that seems primarily designed to test one's patience. Of course, Mr. Briggs is a noted improviser, at the time of the recording in 1999 a Visiting Tutor in Improvisation at the Royal Northern College of Music, so that may explain it.

The rest of the pieces have more substance, although Briggs's playing is a little conservative, so don't expect the music to come to life as it might have under more-flamboyant (and more-controversial) players like Virgil Fox or E. Power Biggs. So, depending on your preference in organ playing (modest or splashy), you take your chances. For me, Briggs seemed a consummate artist in most of the pieces, although Walton's "Orb and Sceptre" march seemed so forward it was almost deafening yet so distant we have to squint over the crowds to see the music performed; odd.

Be that as it may, Faure's "Shylock: V. Nocturne," Nevin's "Will o' the Wisp," and Vierne's "Pieces de Fantasie: Carillon de Westminster" come off better, especially the latter with its playful takes on the chimes of Big Ben. Then, the program ends with another long piece, Reubke's Sonata on the 94th Psalm, which in four movements has its ups and downs (fortunately, mostly ups). Especially if you're a dedicated organ lover, you'll probably enjoy it.

I'd have to say this disc is designed mainly for dedicated organ lovers, or for those curious to hear what these particular, really big organs sound like in surround audio; if, in fact, this IS what they really sound like, regardless of the number of channels. Non organ lovers, though, may safely pass.