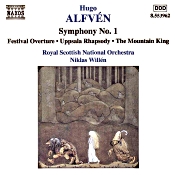 Composer, conductor, and violinist Hugo Alfven (1872-1960) was among Sweden's most-popular classical composers of his day, and this Naxos collection presents a well-rounded picture of the man's work. Most of it sounds like late-Romantic fare, with an emphasis on the programmatic.

The selections begin with the Festival Overture, a somewhat blustery, bombastic piece that, nevertheless, makes a good, rousing curtain raiser. So, it works in the capacity for which the composer doubtless intended it. Maestro Niklas Willen and the Royal Scottish National Orchestra give it their all, and if one doesn't expect something more substantial, it does its job.

The suite that follows, from the ballet The Mountain King, is more temperate, a series of picturesque tone poems based on old Swedish legends. All four sections of the suite are colorful, the two middle parts the most charming. Overall, though, it sounds for the all the world like second-string Grieg. The Uppsala or Swedish Rhapsody that comes next is a cavalcade of familiar Swedish college songs, including a few drinking songs that the college that commissioned the work disapproved of. It bears a superficial resemblance to Brahms's Academic Festival Overture and comes to a stirring conclusion.

The real substance of the disc, however, is Alfven's Symphony No. 1, written in 1897 when the composer was only in his mid twenties. It is a serious work, though not somber. The first movement alternates between light and shadow, between playfulness and dead earnestness. It's hard to find a focus in this opening music, yet it seems to sum up the whole piece. The slow, second movement is overtly Romantic, with lush melodies in abundance. The Scherzo is somewhat too exuberant and becomes tiresome and repetitious. But the concluding Allegro is most engaging, weaving a balletic grace in with its weighty intentions, conductor Willen managing the high-wire act with an appropriate balance.

The sound Naxos provides for the Royal Scottish Orchestra is startlingly real, if a bit dark and heavy. In fact, it's rather huge in size, with a thunderously deep bass impact. The stereo spread is wide; the clarity, in spite of some mid-bass heaviness, is impressive; and the depth of field is more than adequate. This is what some people might have called a stereo spectacular in the old days. Today it's more commonplace to find good, dynamic sonics on a disc; but at a medium a price it comes as a pleasant bonus to some unusual music. Overall, the disc makes a release worth considering.

Email ThisBlogThis!Share to TwitterShare to FacebookShare to Pinterest
Labels: Alfven