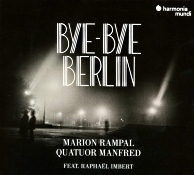 In order to give you an idea of the theme behind this album, I quote from the booklet note, which does a better job than I could do: "English writer Christopher Iserwood's fictionalised Berlin memoirs, Goodbye to Berlin, provided the title for the 1951 Broadway play I am a camera, adapted from Isherwood's novel. His stories also later inspired the 1966 musical comedy Cabaret (notably starring Lotte Lenya) and the scenario for Bob Fosse's 1972 film version. Writing after his departure from Berlin in 1933, Isherwood's optical metaphor evokes one of the most striking and characteristic aesthetic principles that influenced all cultural life in 1920s Berlin, that of 'Neue Sachlichkeit,' or 'New Objectivity.' The movement was considered the essence of modernity, as practised and theorized by many artists."

The album Bye-Bye Berlin includes seventeen songs, airs, and lieder from the 1920s Berlin era, composed by such notable persons as Kurt Weill, Paul Hindemith, Hanns Eisler, Friedrich Hollaender, Bertolt Brecht, and others. The French singer-songwriter Marion Rampal (no relation to the Jean-Pierre Rampal) does the vocals, accompanied by the Quatuor Manfred, a quartet made up of Marie Bereau, violin; Luigi Vecchioni, violin; Emmanuel Haratyk, viola; and Christian Wolff, cello; and featuring Raphael Imbert on saxophones and bass clarinet.

The program presents a fascinating and enlightening look at the cabaret scene in Berlin in the 1920's and early 30's. More important, it's well sung and well performed by the jazz and classical artists involved. Ms. Rampal's dark-toned vocals have a kind of longing, melancholy tinge to them, as though trying to make us aware of the hope of an age and, from a future perspective, the horrors to follow. The accompaniment supports her with a mutual compassion, appearing to share the contradictions of the music.

Favorites? As usual, some things struck me as a tad bland, while many others were hard to resist. The opening Kurt Weill song sets the tone for the album. The sorrowful instrumental by Erwin Schulhoff that follows makes a skillful transition into the familiar "Mack the Knife" tune. And so it goes. Listeners who appreciate the musical Cabaret or just listeners who appreciate classical or jazz music will doubtless find the selections of interest.

Finally, an informative, forty-odd-page set of booklet notes in several languages complete the package. Musically and sonically, it's is a worthy treat.

Producer Alban Moraud and the Alban Morand Studio made the recordings at Cite de la Voix, Vezelay, France in November 2016. The voice is nicely placed in the center front, with the ensemble realistically laid out behind her. The frequency balance seems nearly perfect, although the instruments tend very occasionally to overpower the vocals. So, one can hardly fault the sonics, which come through in lifelike fashion.