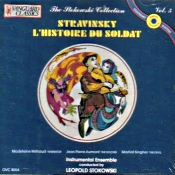 I'm sure it's only my imagination that the Vanguard label issued this recording about thirty times since its initial release in 1967: In English, in French, in a suite, in various remastered editions, etc. However, this 1999 edition is probably the definitive one. It is complete in two parts, about fifty-five minutes long; conducted by Leopold Stokowski and a select few instrumentalists; narrated by Madeleine Milhaud, wife of the composer, Darius Milhaud, and a distinguished actress in her own right; and performed by French opera star Martial Singher and stage and film actor Jean Pierre Aumont.

Although Igor Stravinsky's 1918 L'Histoire du Soldat ("The Soldier's Tale") is no doubt more popular today in its purely instrumental suite, the complete work ("to be read, played, and danced") with its substantial narration is worth a listen. It is more than a drama with music. This story of the soldier and the devil has a charming simplicity of tone and manner, combining lyrical and occasional raucous elements in pointed contrast. Overall, the mood is acerbic, to be sure, but there is much grace underlying the expressionistic exterior, too, which Stokowski and his players capture nicely.

The 1967 Vanguard recording has the distinction of having been the first American recording made with the Dolby Noise Reduction System. As such, there was no great need to impose further noise reduction or other modifications on the present remastering. Instead, it is a 24-bit, SBM, high-definition transfer made from the original 30 I.P.S. tapes and utilizing the same type of Ampex 300 series vacuum tube recorder used when Vanguard first produced it.

The results are impressively transparent yet warm and sweet in a purely realistic way. Detail is excellent. Voices are natural and well placed within the context of the music. Bass has a splendid bloom. Dynamics are wide, transients are quick, and impact is strong. Imaging and depth of field are not particularly pronounced but perceptively accurate. And backgrounds are dead quiet.

In terms of both performance and sound, it is an excellent recording by the standards of any day.