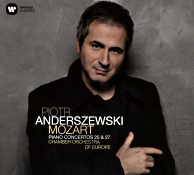 This Mozart album marks the third or fourth time I've reviewed something from Polish pianist and composer Piotr Anderszewski (b. 1969). As with the previous performances I've heard from him, the pianist appears technically brilliant, stylistically accomplished, and interpretively subdued. In other words, while he's pleasant enough to listen to, there may not be a lot that's particularly compelling enough about his interpretations to make listeners who already have favorites in the material turn to Anderszewski for anything new or different.

Anyway, Anderszewski begins the program with the Piano Concerto No. 25 in C major, K. 503, which Mozart wrote in 1786. Interestingly, in Mozart's lifetime it was not among his most-admired works and only gained prominence after his death. Today, music critics and audiences alike consider it one of his finest, most-mature works. Because of its symphonic overtones, the concerto is sometimes compared to the composer's "Jupiter" symphony, and one can see the resemblance in the concerto's long orchestral introduction alone.

When the piano enters, we hear immediately Anderszewski's bravura playing--articulate, smooth, flowing, and seemingly effortless. What we don't hear, however, is much explicative variation from the ordinary. The soloist is sensitive when necessary and exclamatory when needed, but not much more.  In other words, the performance is hard to fault on any technical grounds. Anderszewski provides everything Mozart intended except, perhaps, for heart. While it is not exactly a cold approach to the score, it is not one that a listener can easily fall in love with, either.

I enjoyed the Andante a little more than the opening, and the pianist does inject a healthy dose of poetic sentiment into it. Again, though, there isn't much variety in the movement's conflicting moods, leaving the whole a little flat. Finally, we get to that festive frolic of an ending, which the pianist handles with characteristic frankness, if not exactly flair. It's all very proper and aboveboard.

Anderszewski follows No. 25 with Mozart's final piano concerto, No. 27 in B-flat major, K. 595, which premiered in the year of Mozart's death, 1791, but which Mozart may have written as early as 1788. The work is more strongly linked by internal themes than most of Mozart's other concertos, and it is more thinly scored, helping it to stand out among his many piano works. As with No. 25, No. 27 begins with a lengthy orchestral introduction.

No. 27 is a somewhat more tranquil work than No. 25, and Anderszewski handles it in an even more-moderate fashion than before. As always, his playing is precise, fluent, and fluid, and it's a bit more involving. Maybe it doesn't convey all the longing and despondency of some other renditions, but it does at least give us a glimpse into Mozart's troubled mind at the time of its composition. This is especially true of the mournful Larghetto. With Anderszewski, the movement is sweet without being cloying, a case in which the pianist's straightforwardness is an asset. In the final movement, Mozart alternates and blends a subdued joy and a hushed sadness, a combination that slightly eludes Anderszewski. Nevertheless, with such refined, if low-key, expression, his goals never appear in doubt.

So, as I said earlier, Anderszewski's performances are technically flawless but not exactly inspiring. If one already has a favored Mozart interpreter--say, Stephen Kovacevich, Vladimir Ashkenazy, Sir Clifford Curzon, Evgeny Kissin, or a host of others--there is probably little reason to acquire additional albums by Anderszewski. If, however, one is a fan of Anderszewski's moderately reserved approach to music making, the present performances will doubtless please one.

Producers Andrzej Sasin, Aleksandra Nagorka, and Alain Lanceron and engineers Rainer Maillard and Douglas Ward recorded the album in the Festpeilhaus, Baden Baden, Germany in July 2017. The sound they obtained is clear and clean, if a tad bright and forward. The piano is nicely integrated with the orchestra, well defined, yet not too close. Because of the relatively small, chamber-sized orchestra, we get a fairly dynamic and transparent overall sound, which should satisfy most discerning listeners.