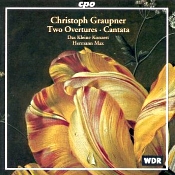 This is the kind of disc that would probably go by unnoticed by most classical record shoppers unless they had heard about it somewhere. Now you've heard about it. Johann Christoph Graupner (1683-1760) was a German Baroque composer with over 1,500 published works to his credit, yet hardly anyone recognizes his name anymore. He worked as Kapellmeister at the Hesse court in Darmstadt for almost fifty years, composing both secular and religious music, and he might have gotten the music director's post in Leipzig that went to J.S Bach instead had Graupner's patron allowed him leave.

Graupner was, in fact, one of the leading composers of his day, but his name and works fell into obscurity. According to what I've read, this obscurity is unfair: his heirs fought legal battles over his manuscripts, and he had very few pupils to carry on his work. So it's good that a label like CPO and artists like soprano Barbara Schlick,  tenor Hein Meens, conductor Hermann Max, and Das Kleine Konzert to honor him on occasion and keep his name alive.

Appropriately, the disc offers two overtures (suites) with a cantata between them as representative of his output. There is nothing remarkable about any of the pieces that might describe him as a genius, but each work is highly likable and approachable. More important, Maestro Max and the small Das Kleine Konzert ensemble play each work with spirit and dignity, never overreaching their limits in headlong displays of period-instrument frenzy.

Executive producer Barbara Schwendowius and engineer Dietrich Wohlfromm recorded the overtures in 1996 and Ms. Schwendowius and engineer Hans Vieren recorded the cantata in 1983. They captured the results in wonderfully revealing and realistic sound, even though the overtures and the cantata were recorded some thirteen years apart. For a few listeners there may be too much sense of "space," too much ambient reflection in the setting, but it is a flattering acoustic that puts the group firmly in the stage picture and the listener firmly in the audience.

Graupner was an important composer, though now largely unknown; the performances are animated yet wholly earnest; the sound is natural and lifelike. It is a lovely album.

To listen to several brief excerpts from this album, click below:

Email ThisBlogThis!Share to TwitterShare to FacebookShare to Pinterest
Labels: Graupner