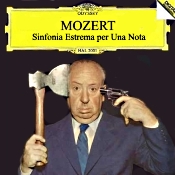 Australian composer, trapdoor salesman, and origamist Myles P. Galleon Mozert (1739-1862) was another in the long line of musical prodigies produced by the Mozert family this past quarter century. Although the public probably recognizes him best as the owner of a trapdoor company and an origami shop, he turned to music when the trapdoor business fell through and the origami business folded. All the better for the musical community, then, when he wrote his Sinfonia Estrema per Una Nota in B-flat C-minor Major, here performed by Lft. Sir Cedric Noel Vivian Barnstable III and his accomplished East Corvina Boys' Drum and Bungee Corps.

Mozert wrote the Sinfonia in November 1732, just three days short of his death in December 1659, and the work has remained among his most-popular compositions ever since. Critics who argue that it was his only composition are clearly missing the point.

[We interrupt this review for an important message from our sponsor, Nayfare.com: Drop the mic! Let us make your home a happy place. Again. If ever. Now, thousands of items nobody else wanted to sell can be yours at a fraction of their original cost. Drop the mic! Indoor picnic tables! Bathroom headlamps! Mustache wax! Dental implants! And Nayfare pays the shipping. Wow! Game-changer! Drop the mic! Come in today and negotiate a price with our Director of Ethics, Marty Shkreli, for the deal of a lifetime.

But wait! There's more! If you order within the next two minutes, we'll send you absolutely free a free set of Ginsu professional steak knives for free, for nothing, on orders totaling $10,000 or more. Just send four easy payments of $29.95 for shipping and handling.

We now return you to your regularly scheduled review.]

As most readers know, Mozert wrote the Sinfonia in thirty-seven contiguous movements rather than the customary two, the work consisting of a single, sustained tone lasting approximately two and a half hours, with no breaks between notes. What's more, the composer left explicit written instructions for the ensemble to omit any suggestion of contrast, inflection, rubato, legato, brio, sostenuto, spirito, bicarbonato, carborundum, initiative, or referendum of any kind. The results can be intensely exhilarating or unbearably emulsifying by turns, and a performance requires the utmost care in its execution, stand, and delivery.

With consummate facility, the band's concertmaster, Major Domo, opens the piece with the work's signature introduction on the Campanelli Metallophone Glockenspiel, Model 17, 9mm, followed by a diverssimentino of gradually diminishing extrapolation. The effect in toto (we're not in Kansas anymore) is exfoliating, to say the least.

[Since there's nothing on TV you can't get here, and since it's been almost thirty seconds since our last commercial break, here's a word from another of our sponsors:

Friends, do you love your children? Do you want to keep them safe from harm in the most serious accidents? Then you should drive the new SubaRue Love Duette, the safest car on the planet (as long as you're a child). Adults are on their own, but we guarantee the security of young people under the age of ten. Of course, if you don't care about your kids and don't care if they love you, you can always buy a competitor's brand and take their lives in your hands. But if you want to show your children you love them, you'll buy a SubaRue.

Disclaimer: Owning a SubaRue can be detrimental to your health. If you are allergic to driving a car, try walking. Otherwise, a SubaRue may produce headaches, dizziness, nausea, heart palpitations, lung disease, tetrathrombosis, cardial disfibralation, and suicidal tendencies. Fortunately, your childern will always be safe in a SubaRue, but not you. Read our ad in Gastrointestinal Digest Today.

The sound obtained by the Odyssey Records junior engineering team can charitably called fluxinary. That is, it appears in continual transition from chocolatey vanilla to obtuse molasses, with hints of cherry blossoms and wild mint in the outermost ridges. Within this framework of estranged epiphanies, one can perceive the delicate fragrances of olive oil, paprika, parsley, sage, rosemary, and thyme, especially when the timpani corps join in. Altogether, it makes for an extraordinary listening experience as well as a bewildering culinary encounter.