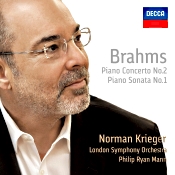 German composer Johannes Brahms (1833–97) wrote two piano concertos, the first one (1858) all rugged and craggy, and the second one over twenty years later (1881) more lyrical and poetic. As American pianist (and professor of music) Norman Krieger had already recorded an excellent version of the First Concerto, it came as no surprise that he would record the Second. And with the help of Maestro Philip Ryan Mann (Music Director of the Arkansas Symphony Orchestra) leading the London Symphony, Krieger does a splendid job with it.

Brahms's Piano Concerto No. 2 in B flat, Op. 83 became an immediate success from the very beginning, with the composer himself as the soloist, and he went on to perform the work all over Europe. Brahms wrote the piece in four movements rather than the traditional three, so it's a little longer than most concertos (I've read that Brahms included the extra movement, a scherzo, because he thought the opening movement sounded too plain and simple.) Still, he filled the work with so many memorable melodies and Krieger plays the whole thing so lovingly, the time flies by.

Krieger's playing is characterized not only by its technical virtuosity but by its clarity of expression. He exposes every note to the listener with extreme care, the pianism precisely executed. Yet he manages to maintain the poetry and lyricism of Brahms in the process. Certainly, Brahms didn't make it easy on the performer, though, and the concerto contains numerous difficult passages, which Krieger flies through with ease. His tone is big and robust, filled with energy and emotion, yet compassionate and yielding at the same time, qualities demanded of the Brahms.

After the relative calm of the first movement, Krieger plays the second-movement with the drama and passion it needs, yet without bombast, pretentiousness, or padding. Again, for Krieger, clarity dominates, although it is of the fervent kind. In the third movement, Krieger is careful not to upstage the lovely cello duet, and it comes off with a charming grace. Then, while the finale may not exhibit as much sheer joy and abandon as some other interpretations, it is exuberant and filled with an effortless good cheer.

Would I recommend Krieger's recording over some of my personal favorites from Stephen Kovacevich (Newton Classics), Emil Giles (DG), Maurizio Pollini (DG), or Sviatoslav Richter SO (RCA)? Probably not. As good as Krieger's version is, listeners may find it a tad too matter-of-fact compared to the others. Nonetheless, Krieger demonstrates much of the same combination of gusto and lyricism as the pianists mentioned and can walk in their company.

Accompanying the concerto, Krieger includes the Brahms Piano Sonata No. 1 in C, Op. 1 (1853), his first published work. Actually, he wrote his Second Sonata before it but wanted this one to be his first published because he liked it more. The opening Allegro is a kind of homage to Beethoven; the second movement is a theme and variations inspired by a song, which he would later rewrite for female chorus; the third movement is a scherzo; and the finale is a rondo, the theme recurring with noticeable changes. Krieger's reading is as skilled and heartfelt as any I've heard, so no complaints here.

Producer Richard Fine and engineer Wolf-Dieter Karwatky recorded the concerto at Abbey Road, Studio 1, London in September 2014 and the sonata at Jesus-Christus-Kirche, Berlin in August 2015. The London Symphony recording at Abbey Road: Who'da thunk? It must be like a second home for them.

Anyway, it's a fine-sounding recording. The sonics are round, warm, and natural, detailed but not at the expense of being hard or bright. The piano is a bit too close for my taste, but it's not right on top of the listener. The hall acoustics are moderately reflective, making the sound more realistic than analytical. Dynamics are acceptably wide and strong, but not grossly so; and the frequency response seems at least adequately extended. It makes for a pleasurable, easy-listening experience.