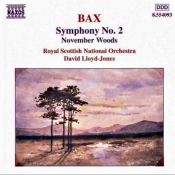 It's always surprised me that the music of English composer Sir Arnold Bax (1883–1953) has never been more recorded. The material is certainly right for the high-fidelity medium. Take his Symphony No. 2 in E minor and C major (1926), for instance. Bax worked on it for two years, scoring it for a very large orchestra, featuring a wide variety of instrumental colors, with big, dramatic contrasts throughout its length. The first of three movements opens on an almost sinister note, builds through a huge, jagged crescendo, settles into a soft, somewhat melancholy mood, and then returns in the finale to the craggy heights of its beginnings, ending where it began in a gentle yet sinister mood. Such rugged individualism was something new for an English composer of the early twentieth century, yet Bax set all of it clearly within a late-Romantic framework.

Audiences apparently loved Bax's Second Symphony for a time, until his style went out of vogue in the mid century. But it isn't so much the symphony here that counts, anyway, as it is his tone poem "November Woods," one of the best things he ever wrote (along with another of his tone poems, "Tintagel"). "November Woods" is even more evocative than the Second Symphony, a kind of miniature adventure in the woods on the proverbial dark and stormy night.

Maestro David Lloyd-Jones brings off both works successfully, especially the symphony, but unfortunately for him he has to compete in the tone poem with Sir Adrian Boult. Boult's "November Woods" on Lyrita is without peer; indeed, it is one of my ten favorite recordings of all time, capturing the spirit of the forest at night with inimitable persuasion. Lloyd-Jones makes the woods dark and menacing. Boult makes them magical, as well.

Besides which Boult's late-Sixties Lyrita sound is superior to the Naxos digital effort. This is not to downgrade the Naxos sound, mind you, which is fine in its own right; but the Lyrita recording has greater transparency, more dynamic range, a wider stereo spread, and, most important, a better presentation of front-to-back imaging, or depth. One has to pay through the nose for the Lyrita reissue, however, about five times the price of the Naxos disc. And therein may lie difference.

You actually can't go wrong with this Naxos release; the performances are first-rate, the sound is OK, and the price is right. It's just my bias showing for the older Lyrita favorite in the tone poem.