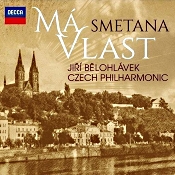 The Czech nationalist composer Bedrich Smetana (1824-1884) wrote his collection of symphonic poems Ma Vlast ("My Country") between 1874 and 1879. The six movements describe his country's beauty and some of its history, the composer dedicating the cycle to the city of Prague, with the first two sections describing some of the sights and sounds of the city.

In the present recording the late Czech conductor Jiri Belohlavek (1946-2017) leads the Czech Philharmonic in one of his last recordings, and, given that over the years Ma Vlast has become a sort of national anthem for the Czech Republic, it's a fitting final tribute to the country and its music. Belohlavek had been the Chief Conductor of the Czech Philharmonic for two separate tenures (1990-92 and 2012-17), and he had already recorded the Smetana cycle with the same orchestra (for the Supraphon label) some twenty years earlier. So it is certainly a pleasure to have a Czech conductor leading a Czech orchestra in Czech music. The stuff must have been in their blood.

Anyway, the music begins with Vysehrad (1874), which Smetana named after a castle of Bohemian kings in Prague and the rock that stands there. Belohlavek judges the movement pretty well, and it comes off among the best in the cycle. The rhythms are relaxed, the melodies are lilting, and the climaxes come unforced.

After that is probably the most popular piece, Vltava (1874), which describes a river called the Moldau in German and uses an old Czech folk tune as its principal theme. In Smetana's original program notes, he tells us that the music traces the countryside the river runs through: meadows, forests, even conjuring up water nymphs along the way. Because this music is so famous, though, there are quite a few separate recordings of it, my own favorite being a very leisurely, very lyrical one recorded long ago by Leopold Stokowski and available in a collection of rhapsodies (RCA or JVC). Whatever, Belohlavek's interpretation couldn't be more different from Stokowski's. Belohlavek moves his river along at a brisk, accelerated pace, quicker than most any version I've heard. Nevertheless, the tempos never sound rushed, just curious.

Coming next is Sarka (1875), referring to a female warrior in Czech legend who exacts a bloody revenge on the male sex after her lover is untrue. This portion of Ma Vlast ties in with the final two sections in describing Bohemia's fierce struggle for independence, and Belohlavek handles it with appropriate fire and fury. Throughout, the Czech orchestra plays splendidly, richly and passionately.

The next title is rather self-explanatory: From Bohemia's Woods and Fields (1875). Here, we're back to the pastoral pleasures of the countryside where we started. This is another well-judged movement from Belohlavek, although I didn't quite picture in my mind the trees and grasslands as clearly as I have with some other conductors, who seem slightly better attuned to the pictorial aspects of the music. Belohlavek appears more perfunctory about things, bringing off the big central theme pretty well, if a bit somberly.

The two last symphonic poems, Tabor (1878) and Blanik (1879), are interconnected and introduce us to a Hussite war tune (the Hussites were followers of John Huss, who initiated a nationalistic movement in Bohemia in the late fourteenth century), and the mountain where the Hussites retreated before their ultimate fight for liberation. I always think of these final portions of the cycle as the battle sequences, but I have never found them as satisfying as Smetana's preceding music. For me, the concluding movements are a little long, a little noisy, and a little repetitious. Whatever, Belohlavek couples these two final movements seamlessly, making them appear all of one piece, and he ends the work as heroically as anyone.

In the end, I cannot say I prefer Belohlavek's recording to some of my old favorites. If I had to choose, I'd still go with Vaclav Neumann (Berlin Classics), Rafael Kubelik (Supraphon), Antal Dorati (Philips or Newton Classics), Paavo Berglund (Warner Classics), Libor Pesek (Virgin Classics), or Antoni Wit (Naxos). Not that I have to choose, and this new entry is surely at least a contender.

Producers Jeri Gemrot and Dr. Alexander Buhr and engineers Vaclav Roubai and Karel Soukenik recorded the music during opening concerts at the Prague Spring Festival, Smetana Hall, Municipal House, Prague in May 2014. The result they obtained is mostly good, old-fashioned Decca sound: very clear, very clean, very wide, very big, very compartmentalized, very highlighted, and very one-dimensional. Fortunately, it is also quiet and fairly natural in its tonal response, although a touch hard and glaring in the upper midrange and a little soft and woolly in the mid-bass. Dynamic impact seems a tad muted at times, too, yet quite striking at others. It's all a bit unusual and occasionally distracting.

Email ThisBlogThis!Share to TwitterShare to FacebookShare to Pinterest
Labels: Smetana