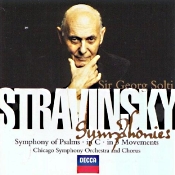 Although his ballets overshadow his other orchestral work, Russian composer Igor Stravinsky (1882-1971) wrote several short symphonies in his lifetime. This disc presents three of them in recordings that were among the last made by Sir Georg Solti and his beloved Chicago Symphony Orchestra before his death in 1997. They show Solti in a more subdued, almost meditative mood, than we usually think of the fiery conductor, although he still whips up a driving rhythm when necessary.

The first work in the program is the Symphony in Three Movements, written on commission in 1945 for the New York Philharmonic. It is the most obviously balletic in style, the first and final movements, especially, reminding the listener of parts of The Rite of Spring. The middle movement, however, is most serene, originally composed as film music for the appearance of the Virgin in The Song of Bernadette. Solti and his players handle the work in a most nuanced and persuasive manner.

Next comes the Symphony in C, in four movements the longest piece on the program and written in 1940 for the Chicago Symphony. It is also the oddest piece in the group, not quite holding together as we might expect of a conventional symphonic work. Its parts seem more erratic in nature than in the other pieces, more mercurial, even though Solti attempts to mitigate their differences as much as possible.

The disc concludes with the sweetest composition of all, the earliest, and maybe the most familiar: the Symphony of Psalms, written in 1930 for the Boston Symphony. It is a setting for three Psalms, Nos. 39, 40, and 150, sung by the Chicago Symphony Chorus and the Glen Ellyn Children's Chorus. Behind their voices, the orchestra sounds like one large organ playing in solemn accompaniment. It's quite lovely.

Decca's sound, made in Orchestra Hall, Chicago, is notable for its absence of any distinguishing characteristics. This can either be good or bad, depending on your point of view. It's good in that there is nothing about the sonics to distract from the music. It's bad if you're looking for an audiophile experience with lots of depth, impact, transparency, roars, and whistles. Not that it doesn't provide its fair share of thrills, particularly in the occasional bass note, but it is rather dry, medium-range sound, not likely to offend or excite.

In all, this disc struck me as sensible and straightforward, but not remarkably stimulating. It is a more-measured Stravinsky, and a more-measured Solti, than some of us have come to expect.