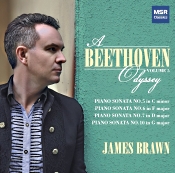 You know how when you've got a favorite actor or actress in a part, and you can't imagine anyone else doing it better: Like Clark Gable in Gone with the Wind, Humphrey Bogart in Casablanca, Barbra Streisand in Funny Girl, Helen Mirren in Prime Suspect, John Thaw in Inspector Morse, or more recently Sam Elliot in The Hero? You know that other people could have done justice to the roles, but you doubt that anyone else could have improved upon them. That's the way I feel about English-born pianist James Brawn and his performances in the Beethoven piano sonatas.

Which is to take nothing away from any of the fine sets of sonatas we've gotten over the years from such distinguished artists as Alfred Brendel, Daniel Barenboim, Stephen Kovacevich, Claudio Arrau, Wilhelm Kempff, Vladimir Ashkenazy, Maurizio Pollini, Artur Schnabel, and others. And I can't claim that Brawn does anything any better than these other pianists. It's just that Brawn's work always feels consistently "right"; it's never flashy or eccentric, extroverted, idiosyncratic, or dull. With Brawn you just can't seem to think of the music played any other way.

Anyhow, with Volume 5 of his "Beethoven Odyssey," Brawn has now recorded twenty of Beethoven's thirty-two piano sonatas, and he shows no signs of slowing down any time soon. Fortunately for us.

The four sonatas Brawn performs on the current program (Nos. 5, 6, 7 and 10) date from 1798 and 1799. As Beethoven did with the others in the cycle, he intended these sonatas for performance in the home for family and friends, in a chamber setting for small gatherings, or on the concert stage for large audiences. They were kind of all-purpose musical pieces, and, of course, the composer never meant them to be played all at once (although some pianists have performed them over a series of evenings). Well, some of Beethoven's concerts were, indeed, all-night affairs, but even for him thirty-two works would be a stretch. Whatever, the sonatas are probably the most well known and maybe the best such works ever written, and Brawn gives them a good workout.

So, what does Brawn do with these early sonatas? It's probably easier, as I suggested above, to say what he doesn't do with them. He isn't as gentle as Kempff; he isn't as dynamic as Pollini; he isn't as poetic as Arrau; he isn't as deliberate as Brendel; he isn't as zestful as Barenboim; and so on. In fact, it's hard to characterize Brawn's playing with simple adjectives. He just molds each phrase as skillfully as possible, the fast movements sounding every bit as vital and vigorous as any you've heard; and the slow movements as lyrical, as serene, as thoughtful as any around.

Brawn takes Sonata No. 5 at a good, heady pace, yet he never oversteps the bounds of propriety, making it sound lively and tranquil by turns. The first movement, especially, appears full of contrasts--dynamic and emotional--and with Brawn in full control, it is a fine introduction to the rest of the pieces. The second, slow movement seems to foreshadow Chopin and conveys a deep feeling of sorrow. Then, the Finale does a complete U-turn, being very quick (prestissimo) and upbeat. Brawn has a good deal of fun with it.

Sonata No. 6 was apparently one of Beethoven's favorites, which may have proved what a good pianist he was. I say this because of the four sonatas on this program, No. 6 is probably the most virtuosic. Brawn's flying fingers were never in more evidence, and he gives it a good workout. The Presto finale is particularly demanding, but Brawn has no difficulty with it, and the result is most entertaining.

Sonata No. 7 is unusual in that it has four movements rather than the traditional three. The work alternates between brightness and gloom, but, fear not, it ends on a smiling note. Again, the score illustrates how nimble Mr. Brawn is on the keyboard, and while I can't claim I've ever liked the piece too well, Brawn does as much as possible to make it enjoyable.

The disc ends with Sonata No. 10, a more elegant and lyrical work than the preceding ones, perhaps an indication of Beethoven's growing maturity; he may have felt he no longer needed to prove his worth through flamboyant showmanship alone. Whatever the case, under Brawn's thoughtful guidance, the sonata sounds flowing, graceful, playful, lilting, dramatic, and exciting. It ends the program in bravura fashion and reinforces my opinion that when Brawn finishes the complete sonatas, the set will rival the very best available. So far, there are simply none better.

Producer Jeremy Hayes and engineer Ben Connellan recorded the music at Potton Hall, Suffolk, United Kingdom in April 2017. The piano sounds about as good as it could sound, namely, like a real piano. The sonics are clear and clean, the hall resonance is nigh-well perfect, and the miking distance provides a realistic seating position on the part of the listener.