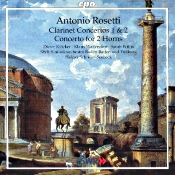 Francesco Antonio Rosetti (c. 1750-1792) is hardly a household name anymore, and despite the name sounding Italian, he was born in Bohemia, a region of today's Czech Republic. As a Kapellmeister for much of his adult life, he composed quite a lot of music: symphonies (over fifty of them), concertos, partitas, songs, and various chamber works, with the concertos represented here among his most popular pieces.

The first thing that struck me upon listening to this disc was its wholly natural and realistic orchestral depth. Then, with the entrance of the clarinet in the program's first selection, the Concerto for Clarinet and Orchestra No. 1 in E-flat major, it was the careful balance of the featured instrument with the rest of the ensemble that impressed me. I cannot imagine even the most finicky audiophile finding fault with the recording's 1998 sound and its excellent imaging from engineer Norbert Vossen.

The next things I noticed about the music were the sweetness and gentleness of the concerto's two opening movements, Dieter Klocker's clarinet playfully caressing the orchestra throughout. This may be a composition of the mid-to-late Classical period (the exact date is unknown but 1789 would not be far off), yet one gets a feeling of early Romanticism in these sections. The piece ends with an enthusiastic and sprightly Rondo that, nevertheless, retains the mood, if not the tempo, of the preceding parts.

The Concerto for Clarinet and Orchestra No. 2, here getting its premiere recording, sounds more ambitious and sophisticated in its instrumental texture and does not convey the same innocence of spirit as the Concerto No. 1 possesses. Nevertheless, Maestro Holger Schroter-Seebeck and his players give it a good and thorough outing, and the results are satisfying.

Concluding the program is Rosetti's Concerto for Two Horns and Orchestra, also in its premiere recording. It is more symphonic in structure and tone than the Clarinet Concertos and, while still entertaining, sounds more commonplace than the accompanying works. The CPO engineers capture the horns quite well, however, and one will find their presence alone a good deal of fun.

This is superb album of unusual and highly enjoyable repertoire that one should not dismiss out of hand just because the name Antonio Rosetti is relatively obscure. In his time, audiences knew and appreciated Rosetti. With discs like this one, maybe people will again get to know him.

Email ThisBlogThis!Share to TwitterShare to FacebookShare to Pinterest
Labels: Rosetti