Dance of the Hours (CD review) 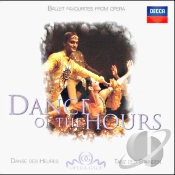 I've come to love compilations of older recordings. You never know what you're going to find, especially on this disc of ballet music from operas featuring some of Decca's biggest-name orchestras and conductors. The audio, recorded between 1962 and 1988 varies, of course, but most of it is good and some of it is terrific, making the whole enterprise all the more enticing.

The highlight of the disc is the title tune, "The Dance of the Hours" from Ponchielli's La Gioconda. Made digitally in 1980, it's taken at a healthy clip by Bruno Bartoletti and the National Philharmonic Orchestra. Indeed, the gait is so quick the hours seem literally to fly by. But the best part is the sound. It's superbly translucent and open. This is due in part to a general absence of bass resonance, but, in fact, there's a general absence of bass, too, a common affliction of all of the pieces on the program. Nonetheless, it's clear, clean, beautiful sound and a joy to listen to.

The next two pieces are Saint-Saens's "Air et danse--Bacchanale" from Samson and Delila and the ballet music from Gounod's Faust, both played by Charles Dutoit and the Montreal Symphony Orchestra. As always from this source, the performances are urbane and velvety smooth, and the sound, from 1987 and 1983 respectively, is warm and ambient. The thing is, although I recognize the Dutoit sound as the more natural, I still preferred the clearer sound from Bartoletti on the previous track.

Next up are the only two works I didn't care for much, Smetana's "Polka" and "Furiant" from The Bartered Bride, done by Istvan Kertesz and the Israel Philharmonic in 1962. Perhaps it's my age catching up with me, but I'm less tolerant of loud, boisterous music anymore. Mussorgsky's "Dance of the Persian slaves" from Khovanshchina, with Ernest Ansermet and the L'Orchestre de la Suisse Romande from 1964, was more up my alley, lighter and more exotic. There is some small background noise here and a bit more high-end edginess, but otherwise it is a fine old recording.

Richard Bonynge and the London Symphony Orchestra do up the ballet music from Rossini's William Tell nicely, and the 1962 sound hardly shows its age. Yet I couldn't help feeling that the music itself was not quite worth the bother. Riccardo Chailly and the Orchestra del Teatro Comunale di Bologna do an acceptable job with the "Grand March" and ballet music from Verdi's Aida. Still, there isn't a lot of bass to reinforce the spectacle, and there should be. There follows another Saint-Saens, the "Danse de la gitane" from Henry VIII follows, again with Richard Bonynge and the LSO, this time from 1971. It holds some small interest. As does the program's concluding number, Gounod's waltz from the opera La Reine de Saba, from the same source. This is a most charming piece and bears a striking family resemblance to Gounod's second-act waltz in Faust.

At mid price, the whole affair seems a worthy purchase for listeners who don't already have favorites in some this material or just want a lot of it in one place.