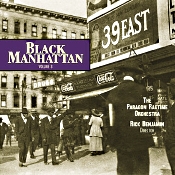 I always seem to be late to the party. I never heard Volumes 1 or 2 of Black Manhattan, but I'm glad I was able to listen to Volume 3. The experience was well worthwhile and highly entertaining.

What I and maybe of millions of others know about the early development of popular black music in America probably begins and ends with Scott Joplin at the turn of the twentieth century and a few jazz artists of the Twenties. But there was more. Much more. Which these albums from Rick Benjamin and the Paragon Ragtime Orchestra demonstrate.

Benjamin's recordings document black music from the late nineteenth century to the 1930's or so, and through careful research he provides a refreshing glimpse into the roots of much modern pop music. In fact, many of the tunes Benjamin and his orchestra play are eye-opening in that played in their original arrangements they don't always sound the way we expect them to. To illustrate, here is a list of the selections on Volume 3, some of them with vocal accompaniments:

The songs span the years 1879-1921, and at twenty-two tracks the album provides almost seventy minutes of music. What's more, the disc comes with a forty-seven page booklet documenting each and every selection, some of the most-extensive and informative notes accompanying any disc I've encountered in a very long while. So, there's that, too.

Anyway, I loved the honesty of the performances, their nuanced emotional appeal, the enthusiasm of the players, and the skill of Maestro Benjamin in handling all of this so deftly. Benjamin never appears interested in showing off the tunes in any untoward way by exaggeration or over-sentimentality.

Most of the tunes are instrumentals, but several feature solo vocals from soprano Janai Brugger, tenor Chauncey Packer, and baritone Edward Pleasant, who seem to have bigger, more operatic voices than the tunes require. Much as I admired these vocals, I preferred the purely instrumental numbers.

Producer and engineer Judith Sherman recorded the music at the American Academy of Arts and Letters, New York in June 2017. The sound nicely captures the ambience of the hall, with good depth of field and a light ambient bloom. This is a realistic sonic reproduction rather than a super-analytical, super-transparent one. Instrument separation is good, vocals are natural (if a little too close for my taste), and dynamic impact is lifelike.

Minor quibbles aside, this was one of the most charming albums I listened to all year.