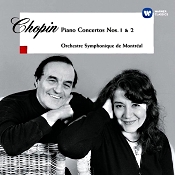 First, a prefatory note:  Since I first heard it in the mid Sixties, Maurizio Polloni's 1960 rendering of Chopin's First Piano Concerto (EMI) has been one of my top ten favorite recordings of all time. I never thought that anything could or would shake my confidence in that particular conviction. But then I should never have underestimated Martha Argerich, who continually amazes me with each of her releases. Her 1998 recording of the First Concerto is sublime. No, I will not go so far as to concede that it overshadows Pollini's version, but it comes closer than most other recordings I have listened to in the past fifty years or so.

In the first movement, Argerich and Pollini are equally poetic and equally heroic, and if anyone can find an advantage for either of them, he or she is a better listener than I. Amazingly, the interpretations are within two seconds of one another in the opening movement, and both are hauntingly beautiful in the big middle tune.

In the slow, second movement, however, I have to stick with Pollini.  Chopin himself describes the movement as "...calm and melancholy, giving the impression of someone looking gently towards a spot which calls to mind a thousand happy memories. It is a kind of reverie in the moonlight on a beautiful spring evening." Such is Pollini's account, which lingers ever that much longer in the moonlight than Argerich's.

In the final movement, the Rondo Vivace, again the two  performances are almost equally vigorous, but here I have to admit to a marginally greater fluency in Argerich's playing, even if she takes things at a rather heady pace.

What I cannot deny is that EMI's (now Warner's) sound mostly improved over the years. It was richer, smoother, quieter, and more refined in 1998 than in 1960. I say "mostly," though, because the actual piano sound is a tad more well focused in the older recording and a bit more crisply defined. Perhaps for the first-time buyer of either disc, price may play a part in the decision or the couplings on the two discs.

The new Argerich issue combines the First Concerto with the Second (actually written earlier than the First). As expected, the Second also goes to the top of the pile, although I don't especially respond to much of the music except its lovely second movement. Pollini rounds out his mid-priced album with a collection of short solo Chopin pieces, all of them must-buys as well. So, in the end I'd have to advise any serious music collector to purchase both discs. The older recording is an acknowledged classic; the newer one was my personal choice for record of the year when it came out. What else can a person do but own them both?