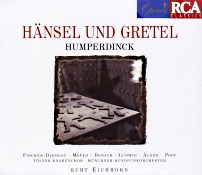 German composer Engelbert Humperdinck's 1893 opera Hansel und Gretel is surely one of the sweetest, gentlest, most tuneful, yet exciting pieces of music ever written for children or adults. It has all the qualities of a great fairy tale.

What's more, it has been fortunate over the years to have received a number of good recordings, in particular the 1953 mono version from Karajan, Schwarzkopf, and company (EMI). But for listeners who won't put up with monaural sound, this reissue from RCA, with only the slightest hint of tape hiss, provides a pleasing, mid-priced alternative. Indeed, of all the stereo versions available, this one, originally recorded for Eurodisc in 1971 is probably the best bargain. It does not quite outweigh the merits of Sir Colin Davis's stereo set for Philips, but it sounds as good or better.

Humperdinck based the plot on the popular tale by the Brothers Grimm about a brother and sister who live on the edge of a forest. The forest is haunted by a witch who bakes little children into gingerbread. Their family is very poor, and one day while picking berries, Hansel and Gretel get lost and captured by the witch. But the resourceful children turn the tables on the witch, shoving her into the oven, instead. The story is simple enough for kids to follow, as well as non opera buffs. With its abundance of cheerful, enchanting, atmospheric, and sometimes spooky melodies, it's a sure crowd pleaser.

Maestro Kurt Eichhorn's direction is the real star of the show. He conducts the piece with a winning simplicity that is hard to resist. The stars, too, do their part; and a more star-studded cast one could hardly ask for. Dietrich Fischer-Dieskau as the father is especially appealing, and Christa Ludwig as the Witch is appropriately sinister, if not too menacing. Anna Moffo is an adequate Hansel and Helen Donath makes a delicate Gretel, although both of their voices seem a little old for children.

RCA's sound is wide, deep, and ambient, very slightly veiled but set within a reasonably natural acoustic. The rival Karajan mono set is more Wagnerian in scope, yet it is still as intimate as any of them; if it were in stereo, it would be my unconditional first choice. As it stands, we have alternatives from the aforementioned Colin Davis, whose interpretation is most magical but whose sound is a bit more inflated than the rest; from Jeffrey Tate (EMI), who is most energetic and except for some edginess the best recorded; and from Donald Runnicles (Teldec), one I have not actually heard but about which I have read good notices.

Anyway, this RCA reissue is close to the best, and for its asking price makes a safe first-time investment.

Email ThisBlogThis!Share to TwitterShare to FacebookShare to Pinterest
Labels: Humperdinck