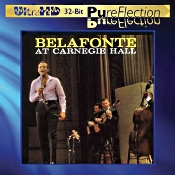 Many years ago, in the 1960's and 70's, I used to listen to a popular weekly FM radio show in the San Francisco Bay Area called "Excursions in Stereo." Similar to John Sunier's even later "Audiophile Edition," "Excursions" gave people a chance to hear some of the best stereo then available. Every week the show's host, Jim Gabbert, would play cuts from his favorite albums, and every week he would invariably include a track or two from the 1959 RCA recording of Harry Belafonte's concert at Carnegie Hall. Naturally, I had to buy the two-LP set for myself, and when I did, I was not disappointed, except that I had taken a while to discover it. It remains one of the best, most realistic reproductions of a live pop concert I've ever heard.

When the CD era arrived, RCA cut out a few tracks and fit the program onto a single compact disc. But it wasn't the excising of four or five songs that disappointed me so much as their almost complete destruction of the sound of the live event. Fortunately, that became a forgotten issue, at least for a little while, because in the mid 90's Classic Compact Discs remastered the entire program on two gold discs, restoring much of the original sound (as well as the omitted songs). Gone was the silver disc's harshness and one-dimensionality, replaced by the master tape's richer, cleaner tones and three-dimensionality. Although the sound seemed a little drier than I remembered it from the old LP days, it still conveyed a sense of presence unmatched by most recent digital efforts. This was a treasured LP set that I regretted coming to late in its history, but I was more than happy to have acquired the gold edition. Too bad Classic Compact Discs went out of business years ago, and the gold discs are no longer available (except used, I suppose).

Well, that was my history with the recording until the present. Now, I'm happy to say, there's another choice, and it's better than anything that's come before. The current incarnation of the Belafonte concert comes to us via UltraHD PureFlection, one of the last projects that FIM (First Impression Music) producer Winston Ma was involved with prior to his death. To manage such a great-sounding disc, Winston had Michael Bishop of Five/Four Productions do the 32-bit remastering and used UltraHD, an extra-precise manufacturing process, to complete the job.

One thing noticeable about Belafonte's performances in this concert is that he generally slows things down compared to his equivalent studio releases. You'll observe it in things like "Day-O" and "Jamaica Farewell," which seem more heartfelt taken at the slightly slower pace. Other than that, Belafonte is Belafonte, the man who practically invented calypso; or, at least, popularized it in America. Wonderful music in 1959; wonderful music today.

To evaluate the disc's sound quality, needless to say I put it up against the best version I already had in my collection, the aforementioned gold edition from Classic Compact Discs. Here, the comparison was fascinating. The gold remastering had sounded so much better than RCA's silver disc, I couldn't imagine anything surpassing it. But after adjusting for playback levels, the UltraHD disc did, indeed, eclipse it. Especially in clarity. I had never noticed the gold discs sounding so soft or warm before, but compared to the crystalline clarity of the UltraHD disc, the gold discs appear decidedly veiled, if only slightly. Of course, you may prefer a softer, warmer sound because you think it's easier on the ear. Fair enough; individual preference always takes precedence. But, really, the UltraHD is not only more transparent, it's just as easy on the ear as the gold, with no brightness, harshness, edginess, or glare. What's more, it appears to preserve even more of the original master tape's legendary presence, depth, dimensionality, and general feeling of aliveness than the gold discs. So, overall, the UltraHD is a superb product; no reservations whatsoever.

You can find this product at a number of on-line vendors, but you'll find some of the best prices at Elusive Disc: http://www.elusivedisc.com/

Email ThisBlogThis!Share to TwitterShare to FacebookShare to Pinterest
Labels: Belafonte