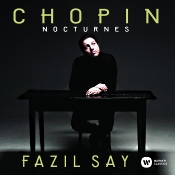 According to the Harvard Concise Dictionary of Music, a nocturne is "most often, a romantic character piece for piano with an expressive melody over a broken-chord movement accompaniment." And, of course, the nocturne is usually suggestive of the night. No, the Polish composer and pianist Frederic Chopin (1810-1849) did not invent the form (that honor is commonly accorded to the Irishman John Field, 1782-1837), but Chopin probably did more than anyone else to popularize the form, writing twenty-one nocturnes during his lifetime, three of them published posthumously.

In the liner notes, Say tells us that "For the first time I'm recording a Chopin album, because I had a particular idea about playing Chopin. Chopin revolutionised piano music, introducing so many new sounds that are very poetic. His music is poetry. We're facing very difficult times in the world, but if you play this music, you forget everything."

And that's the way he plays the nocturnes--poetically--with all that the word implies, including the qualities of imagination, feeling, and lyricism. It also means, however, that he takes a few more liberties with the music than many other Chopin interpreters do. The other complete sets I had on hand for comparison were from Claudio Arrau (Philips), Maurizio Pollini (DG), and Arthur Rubinstein (RCA), all of whom play the music at a steadier pace: Arrau more gently, Pollini more tersely, and Rubinstein more eloquently.

Mr. Say is looser with his rubato, his tempos and dynamic contrasts more pronounced compared to Arrau, Pollini, or Rubinstein. Not that there is anything wrong with this approach since a certain degree of idiosyncrasy is always welcome in a performance if it is not exaggerated to the point of distraction. With Say his singular renditions do not draw one's attention away from the music, unless, that is, you are a Chopin devotee who will allow for no such meddling in the composer's work. Then, you may want to stick with old favorites.

Anyhow, as I mentioned, Say's interpretations are on the creative side, following a poetic pattern that emphasizes slightly speedier sections than we may be accustomed to, followed by calmer, more leisurely ones, with strong accents throughout. While Say's playing is virtuosic, as goes without saying, he uses that virtuosity to the advantage of the music, not merely to show off. Chopin's nocturnes are exquisite little gems, and Say does his utmost to underline, accent, and shed new light on them. The posthumous nocturnes are especially welcome as one so seldom hears them.

If the light Say sheds is a bit more specific to his particular style of piano playing than others may display, it never takes away from the beauty of Chopin's work. In all, I wouldn't say these are performances that listeners might want as an only set, but they are recordings many listeners might easily want to fit in with older, more-cherished ones. For me, the older, more-cherished set is from Arthur Rubinstein, who seems to do every piece to perfection. Nevertheless, I doubt even Say would claim his set of nocturnes should supplant everything that went before. His set is like a supplement, a new look, and as such it works fine.

Producer and engineer Jean-Martial Golaz recorded the music at the Great Hall, Mozarteum Salzburg in March 2016. The miking leaves a lot of room for hall ambience, which gives the music an extra measure of nocturnal mystery without being so reverberant that it wholly clouds the notes. In addition, the detail, definition, and dynamics are a tad on the soft side, which is also OK given the type of material involved and the naturally warm flavor of piano music in general. This is a lush, warm, full recording that complements the music making.